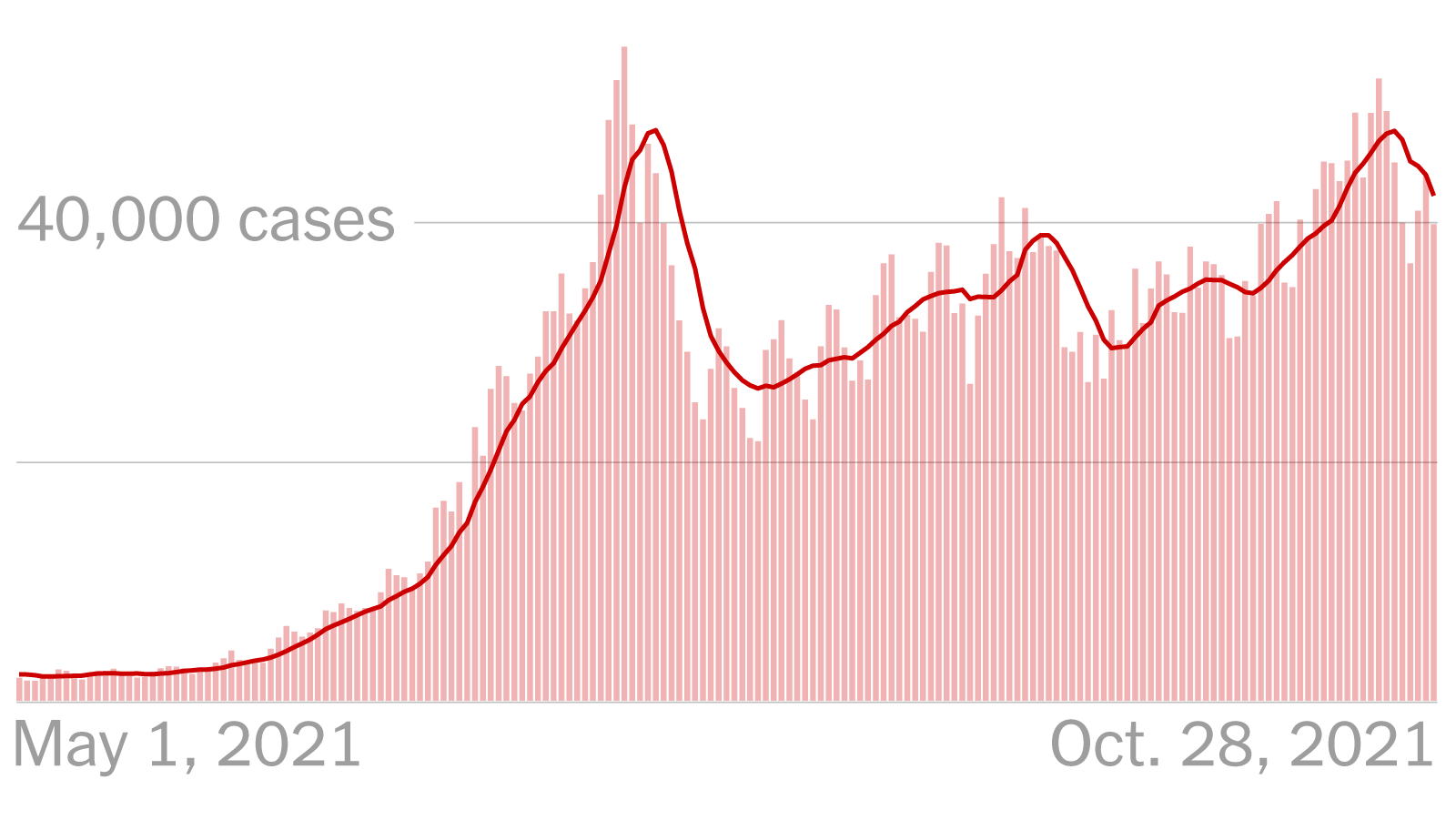 Britain is once again at the peak of a coronavirus surge, just over three months after all coronavirus restrictions were lifted on what Prime Minister Boris Johnson hailed as “Freedom Day.”

Cases have stayed at high levels since then, with more than 20,000 new cases recorded each day. There are almost 9,000 Britons hospitalized with Covid-19 — the highest level since March, when the United Kingdom was in the midst of a long national lockdown.

Unlike the rises and falls of previous periods of infection, the most recent wave shows the positive impact of Britain’s vaccination rollout: Far fewer Covid hospital admissions and deaths have followed the rise in cases than in previous waves. Still, health experts contend that the ongoing hospitalizations and deaths are burdening overstretched hospitals and could be reduced with basic measures.

How the current wave compares with last winter’s peak

Tim Spector, a professor at King’s College London, who has been leading a major study of Covid symptoms since the start of the pandemic, said that it is hard to predict whether high levels of transmission will continue. One reason for the uncertainty, he said, is that public behavior, led by government guidance, is very different now than in previous surges. “In past waves, there’s been a general panic and reduction in mobility,” he said.

“The trouble is that the government has gone from ‘operation fear’ that we had a year ago to ‘operation complacency,’ ” Professor Spector said. “It’s a massive switch.”

England has some of the loosest coronavirus protections in Europe since July 19, when it lifted all legal restrictions, including mandatory mask-wearing. In a recent survey by YouGov and Imperial College London, 21 percent of Britons said they rarely or never wear a face mask in public — about four times as many as in Italy and Spain.

Despite the extended surge in cases, the U.K.’s Scientific Advisory Group for Emergencies recently said that behaviors in Britain are closer to prepandemic levels than at any time since March 2020.

The current surge is being primarily driven by high levels of infection in school-age children, with more than a third of all recent cases being reported in those under 15 years old.

Unlike most of Europe, the U.K. was slow to approve vaccines for adolescents. The recommendation of a single dose of the Pfizer-BioNTech vaccine for 12- to 15-year-olds was not announced until mid-September — weeks after many students had returned to school from summer vacation. So far, just 21 percent of 12- to 15-year-olds are vaccinated in England, compared with 80 percent of adults.

School-age children were about 15 times as likely to be infected as 80-year-olds on Oct. 19.

Professor Christina Pagel, the director of the Clinical Operational Research Unit at University College London, said that the lag in approval of vaccines for 12- to 15-year-olds was an enormous mistake.

“​​We’ve had an extra 10 or 20 percent of kids infected when they didn’t need to be, and we’re dealing with the hospitalizations and deaths that came from that,” Professor Pagel said. “And with long Covid, even if that affects 5 percent of them, that’s a lot of kids.”

These infections have started to spread into older age groups in recent weeks, and overall in England, about 20 percent of beds in intensive care units are filled with Covid patients. Experts warn that the National Health Service could face intense pressure this winter.

Modeling conducted by Airfinity, an analytics firm, shows that a double hit of Covid and flu cases could overwhelm U.K. hospitals by early 2022, with a severe flu season leading to over 6,000 hospitalizations per week for flu alone. In addition, the N.H.S. is trying to clear a growing backlog of 5.7 million surgeries, many of which were cancelled during the pandemic.

Experts agree that Covid vaccine booster doses — an additional shot given once the protection from the initial inoculation starts to decline — are going to be essential to reduce demand on hospitals in the coming months. A recent study from Public Health England found that protection against symptomatic infection drops significantly in the five months following a second vaccine dose.

The study found the Pfizer-BioNTech vaccine’s effectiveness at preventing symptomatic infection from the Delta variant dropped to 70 percent after five months from 90 percent two weeks after full immunization. Waning immunity was more severe for those who received the Oxford-AstraZeneca vaccine; five months after being administered, its effectiveness dropped to 47 percent from 67 percent.

The U.K. was among the early frontrunners of the global vaccine rollout. It approved the Oxford-AstraZeneca and Pfizer-BioNTech vaccines in December, in both cases weeks before the European Union did. Its early deals with manufacturers also secured supplies of vaccines, allowing the U.K. to protect millions of its most vulnerable residents while the European Union engaged in a public dispute with AstraZeneca over delivery delays.

But this early lead is now coming at a cost, with a much greater share of the population at risk of waning immunity, adding urgency to its rollout of booster doses.

Share of the population receiving their second vaccine dose

Sources: U.K. Health Security Agency; the European Center for Disease Prevention and Control | Note: Data for E.U. countries are reported weekly by the E.C.D.C., while English data is reported daily. The weekly figures have been adjusted to take this into account. The charts also include people receiving their first dose of the single-dose Johnson & Johnson vaccine.

Booster doses are currently being rolled out to everyone aged 50 and above in Britain, as well as health care workers and the clinically vulnerable, six months after their second doses. So far, 6.7 million booster doses, or enough to cover 10 percent of the total population, have been administered.

The U.K.’s high case rates had been an outlier in Western Europe in recent weeks, as infections in France, Germany and Spain all plateaued at low levels. But rising cases in Germany hint that Britain’s woes could spread across the continent this winter, with fears that waning immunity and increased indoor mixing will fuel further infection.

The British government has so far resisted calls to invoke its “Plan B” for suppressing infections over the winter. That protocol would include vaccine passes for nightclubs and concerts, mandatory face coverings and a push for those who can to work from home.

At a recent press conference, Sajid Javid, the health secretary, said that although the N.H.S. is under increasing pressure, he believed the current lack of restrictions remained appropriate. “If we feel at any point it’s becoming unsustainable, then we won’t hesitate to act,” he added.

Dr. Chaand Nagpaul, council chair of the British Medical Association, pressed for more urgent action in a recent statement. He said the N.H.S. is heading into winter with a “depleted and exhausted work force” and called on the government to enact its “Plan B” measures now to prevent the N.H.S. from being overwhelmed.

The government is also facing mounting criticism after 43,000 people were mistakenly informed that they had tested negative for the virus. A private laboratory that was processing the tests in Wolverhampton, in the West Midlands of England, has suspended operations after an investigation by the U.K. Health Security Agency. Most of the recipients of the false negatives were based in southwestern England, which now has the highest case rates in the U.K.

Problems at the laboratory came to light when people with symptoms reported discrepancies between positive lateral flow tests — a type of rapid test that can be taken at home and has been made widely available by the government — and subsequent negative P.C.R. test results. Regular lateral flow testing is a critical part of the government’s plan to get through the winter without reintroducing restrictions.

The latest data shows that almost one in four confirmed cases in England are first caught with a lateral flow test, which experts say is an important tool to find asymptomatic infections. Millions of these rapid tests are conducted in homes, schools and workplaces across the country each week, but only a fraction of the results are reported to the government.

Case rates have fallen in the U.K. in the past few days, although it remains to be seen whether this trend will continue once children return to school next week after a mid-semester break. Professor Pagel said she hoped the brief vacation from school would serve as a break in transmission. Still, she warned, “Even if cases do start declining, they’re not going to go down super fast. If we added in masks and home working we could make them go down quicker, so why aren’t we doing that?”

She added, “Last winter was awful, and we shouldn’t get anywhere near that level before raising alarm bells.”