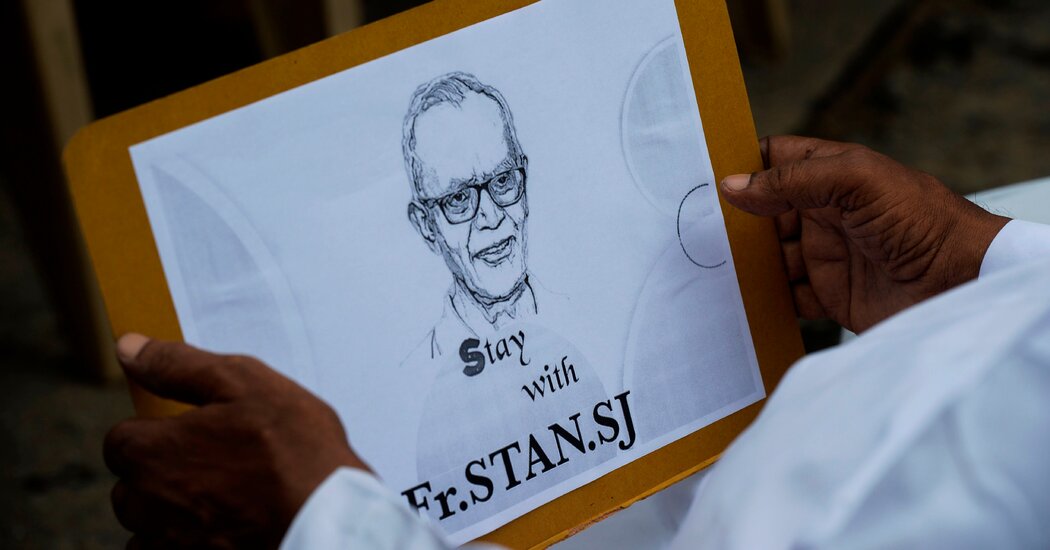 NEW DELHI — A Jesuit priest and activist with Parkinson’s disease, whose high-profile arrest was seen as an example of the broad scope of the Indian government’s unpopular antiterrorism law, died on Monday still in custody at a hospital in Mumbai, his lawyer said.

The Rev. Stan Swamy — at 84 the oldest person to be accused of terrorism in India — was arrested last October under the Unlawful Activities Prevention Act, which critics say is meant to stifle dissent. His detention incited widespread accusations of government cruelty.

Rights activists and other critics say the government of Prime Minister Narendra Modi has used the act and the coronavirus pandemic as a pretext to round up government critics and silence activists who are protesting what they see as the government’s iron-fisted and anti-minority policies.

A number of academics, writers and poets are being held under antiterrorism laws that have been used to criminalize everything from leading rallies to posting political messages on social media.

Nearly all of the accused remained imprisoned throughout the pandemic, even as India temporarily released thousands of other prisoners out of concern that they were likely to acquire the virus while in custody.

In October, just after his arrest, Father Swamy recorded a video that was uploaded to YouTube.

“Because of my age, I have certain ailments,” he said. “This is something that I am communicating to them and let us hope that some human sense will prevail.”

Father Swamy’s trembling hands — characteristic of many with Parkinson’s — made it difficult for him to eat and drink and he formally asked the court to give him a sippy cup and straw. After a month that was granted.

But the priest’s repeated requests for bail, which cited his frail health, were denied. In May, when Father Swamy became very ill, he was moved to a private hospital, where he was found to have Covid-19. That is where he died, his lawyer, Mihir Desai, said.

Father Swamy lived in the mineral-rich but largely impoverished state of Jharkhand in eastern India. For half a century, he was an advocate for Jharkhand’s tribal Adivasi people, pitting himself against big mining companies and the public officials behind them, and other marginalized groups, including the Dalits, the lowest in Hinduism’s caste hierarchy.

As industrialization reached Jharkhand in the 1980s, Father Swamy set up a center dedicated to social activism, particularly the protection of Adivasis’ legal rights to land and water.

“He was a champion of the poor and the voiceless,” Stany D’Souza, a fellow Jesuit, said during an online memorial on Monday.

The son of farmers in the southern state of Tamil Nadu, Father Swamy was sent to Jharkhand as a teenage Jesuit novitiate.

“He fell in love with the Adivasi way of life: their egalitarianism, their consensus-based decision-making, their closeness and their contentment,” said Tony PM, another Jesuit priest who worked with Father Swamy in Jharkhand.

But last October, members of India’s counterterrorism task force entered Father Swamy’s communal home in Ranchi, the capital of Jharkhand, and took him to a prison in Mumbai, India’s financial capital.

He was among more than a dozen people who were arrested under India’s sweeping antiterrorism act. Their arrests stem from an event that began as a commemoration of a 200-year-old Dalit military victory but spiraled into communal violence that left one person dead.

Father Swamy and more than a dozen other activists were accused of inflammatory speech and of ties to Maoist insurgents who have been fighting the Indian state for decades.

Father Swamy denied the charges, but he along with the others accused were kept in detention as the investigation into the so-called Koregaon Bhima case dragged on.

“This is inhuman,” Justice Madan Bhimarao Lokur, a former judge on India’s Supreme Court, said during the memorial. “I have been watching for two years now the pulverization of human rights. It has been a downhill slide and it has culminated in today’s tragic death.”

Hundreds of tributes — from condolences to condemnation — were made on Twitter, including from Rahul Gandhi, the leader of India’s main opposition party, the Congress party.

Eamon Gilmore, the European Union’s special representative for Human Rights, said that the E.U. had repeatedly raised the priest’s case with the authorities.

Mary Lawlor, the United Nations special rapporteur on human rights defenders, condemned his jailing. “The news from India today,” she posted on Twitter, “is devastating.”