France and U.S. Agree on the Perils of a Rising... 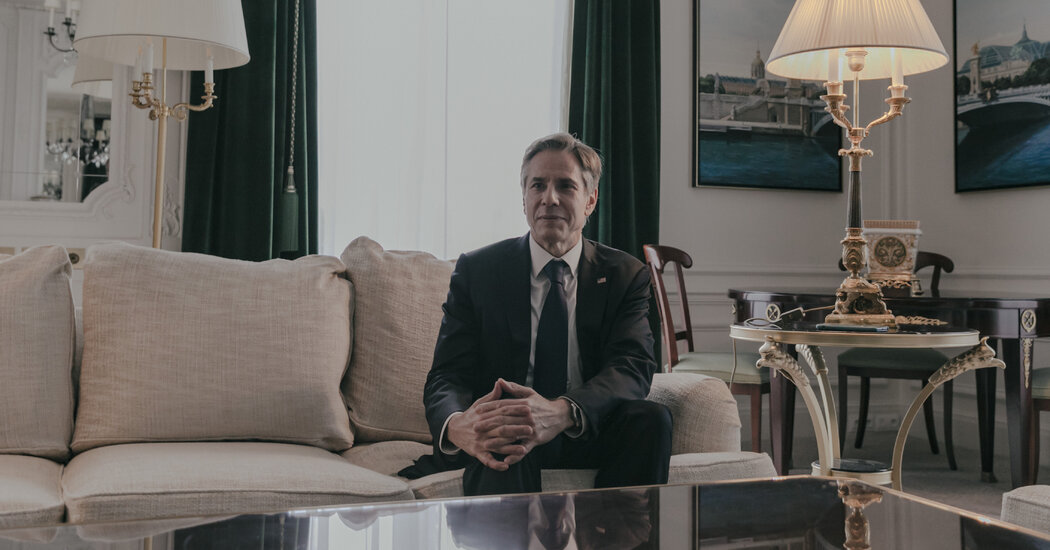 PARIS — Secretary of State Antony J. Blinken, speaking in an interview after a meeting with President Emmanuel Macron of France, said the United States and France were “on the same page” in their determination to resist the possibility of a Chinese-led world order that would be “profoundly illiberal in nature.”

On his first visit as secretary to France, where he lived for nine years in his youth and attended high school, Mr. Blinken said “our purpose is not to contain China” or “try to hold China back.” But when it comes to defending a free and open international order, “we will stand up.”

The alternative, he suggested, was either no order — a world of chaos that “inevitably leads to conflict and that almost inevitably brings us in” — or Chinese domination. The challenge for democracies was “to deliver for their people and hopefully for people around the world” in order to reinforce a model challenged in recent years by its own internal fractures and by rising autocracies.

“And I found that President Macron was thinking in exactly the same way and focused on the need to bring practical results,” Mr. Blinken said.

Mr. Blinken’s pleasure at being back in France was evident. At a meeting earlier in the day, France’s foreign minister, Jean-Yves Le Drian, greeted the secretary as “My dear Tony” and said, “Welcome home.”

Asked about this, Mr. Blinken said, “Oh yes, it is a sacred home for me. I was here from age 9 to 18. I had a life-changing experience.”

Having said Thursday in Berlin that the United States has “no better friend in the world than Germany,” he said he would say the same thing about France. As he turned to the foundations of America’s oldest alliance, Mr. Blinken’s emotion was evident.

He continued: “And ultimately — obviously there are differences of culture, of history, of so many things — but when it comes to a basic set of shared values, there are few countries that are closer.”

This amounted to a deeply felt personal call for France and the United States to renew their bond by standing together at a time of challenges, from the coronavirus pandemic to the rise of China, that present “an imperative for cooperation, for coordination, for working together,” in Mr. Blinken’s words.

Nevertheless, the convergence of American and French views was a little surprising in that Mr. Macron has made several remarks recently insisting on the importance of Europe’s strategic autonomy.

On the eve of the Group of 7 and NATO meetings earlier this month, Mr. Macron said: “Unless my map has a problem, China is not part of the geography of the Atlantic” — a clear jab at NATO confronting China.

Such Gaullist assertions of independent French strategy tend to play well here, and Mr. Macron plans to run for re-election next year. In the end, France joined the other large, wealthy democracies at the G7 in making clear that they saw China and Russia as repressive and aggressive ideological rivals, and other NATO members in saying China presents “systemic challenges” to “areas relevant to military security.”

China’s Belt and Road Initiative has built roads, ports, railways and communications networks across Africa and elsewhere, expanding Beijing’s economic and security influence with the countries that sign on, leaving them beholden and often deeply indebted.

Turning to the Biden administration’s attempt to counter China’s strategy through a “Build Back Better for the World” program, dubbed B3W, Mr. Blinken made clear in the interview which he thinks the better option is for low and middle-income countries.

With China, he said, “there are always strings attached,” including “the use of vaccines as a coercive tool with other countries.” The West, by contrast, was pledging one billion vaccine doses to end the pandemic “with no political strings.”

After six rounds of nuclear talks with Tehran and no agreement to revive the 2015 Iran nuclear deal, which Mr. Trump abandoned, Mr. Blinken said that the progress of Iran’s nuclear program could become an insurmountable obstacle.

“If this continues, if they continue to spin more sophisticated centrifuges at higher and higher levels, we will get to a point where it will be very difficult as a practical matter” to return to the parameters of the original nuclear deal, he said.

“I can’t put a date on it,” Mr. Blinken said of the day when the Biden administration might walk away from the nuclear talks, but “it’s getting closer.”

During a news conference earlier in the day with Mr. Le Drian, Mr. Blinken warned that “serious differences” persist with Tehran over its nuclear program but that preventing an Iranian nuclear weapons capability remains in the American national interest.

Of his planned meeting next week in Italy with the new Israeli foreign minister, Yair Lapid, Mr. Blinken said one aim was to “try to rebuild a little bit more trust and confidence between Israelis and Palestinians so that at some point the conditions may exist to actually to move forward again on negotiations, on a lasting peace.”

Referring to Israel’s recent war with Hamas in Gaza, as well as clashes in Israel and the occupied West Bank, he added, “But we also know — and I think we’ve just seen evidence of that — that they are not a substitute for dealing with the Israeli-Palestinian issue.”