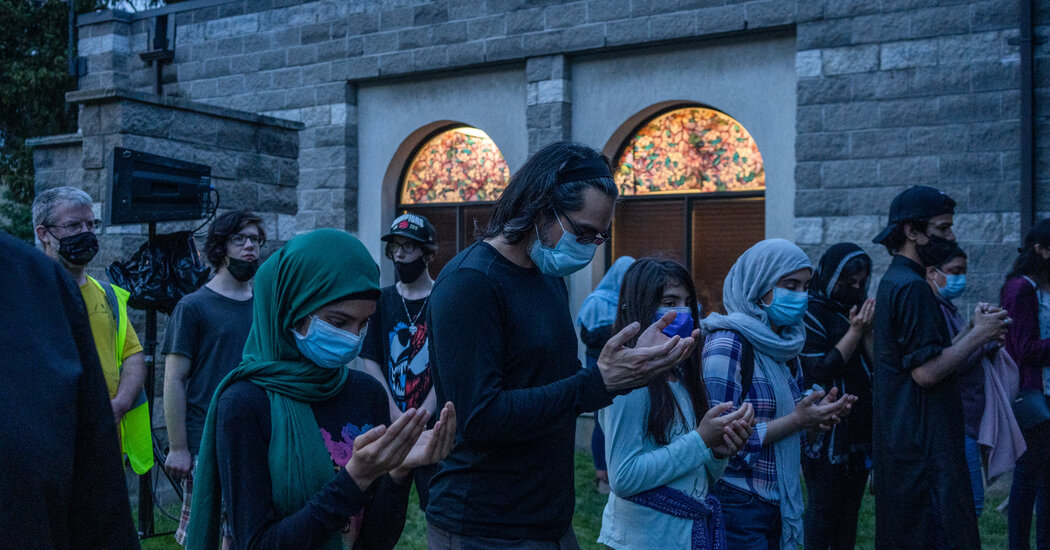 First came the shocking discovery of the remains of 215 Indigenous children on the grounds of a former residential school in Kamloops. Then it was compounded this week when a motorist used a black pickup truck to target a Muslim family in London, Ontario, killing four members of the family and seriously injuring one by running them over.

A public funeral will be held on Saturday for Salman Afzaal, 46, a physiotherapist who worked in long-term care homes; his wife Madiha Salman, 44, who was a doctoral student in civil engineering; their daughter, Yumna, 15; and Mr. Afzaal’s mother, Talat Afzaal, 74. Fayez, 9 and now orphaned, remains hospitalized with serious injuries but is expected to recover.

[Read: As a Family Is Mourned, Canada Grapples With Anti-Muslim Bias ]

The London attack was not the first against Muslims in Canada, of course. Prominent on the too-long list is the 2017 shooting attack on a mosque in Quebec City that killed six people and wounded eight.

Not long after the police revealed that the London attack was a crime and its victims were singled out because of their faith, many members of the Muslim community began calling for a national summit on Islamophobia. They proposed a gathering of their leadership and political leaders from all levels of government. On Friday the House of Commons unanimously passed a nonbinding motion calling on the government to hold such a meeting before the end of July.

Mustafa Farooq, the chief executive of the National Council of Canadian Muslims, told me that the summit will have to look beyond just the violence Islamophobia breeds, examining the systemic forms it takes in places like national security agencies and how educational systems teach about racism.

Also on his list, and that of many other Muslims, is examining laws that they believe target their community. And things are likely to become heated when the conversation turns to a Quebec law that bans the wearing of religious symbols at workplaces for people in several categories of public sector jobs.

“No one in their right mind is making a direct line between Bill 21 in Quebec and the London attack,” Mr. Farooq told me. “But there’s no way to look at Bill 21 and not understand it as second-class citizenship and exclusion.” The Quebec law and other policies, as well as statements from some politicians, he added, “all contribute to a culture of Islamophobia that is certainly not helpful in the times that we’re living in.”

While the Quebec legislation is not aimed at any particular religion, it has disproportionately affected Muslim women and women from other faiths. My colleague in Montreal, Dan Bilefsky, wrote about how it upended the life of a Muslim lawyer in the province as well as those of a Sikh teacher and an Orthodox Jewish teacher.

Several Quebecers this week rejected criticism of the law.

On Wednesday, Yves-François Blanchet, leader of the Bloc Québécois, said that Quebecers are “tired of being treated like racists.”

Defenders of the legislation say that rather than being a limit on any religion, it’s a necessary step to preserving the secularism Quebec established after long being dominated by the Roman Catholic church.

While all the party leaders in Parliament, Mr. Blanchet aside, have expressed misgivings about Quebec’s law, they all shy away when it comes to having the federal government join in the legal challenge against it. Many political observers attribute their hesitancy to fear of alienating voters in Quebec, where polls show strong support for the ban.

“It is extremely important to recognize that provinces have the right to put forward bills that align with their priorities,” Prime Minister Justin Trudeau said this week. “I think people have a right to question those and go to court to defend their rights, as is happening right now.”

Mr. Farooq said that he would press federal party leaders to “do a better job of stating clearly how they will oppose Bill 21 — not just that they personally oppose it, but that they actually are going to take action to assist organizations like ours trying to strike it down.”

In April a court largely upheld the law and the province’s use of a constitutional override to uphold it. That decision is being appealed by the province, which wants the entire law to remain intact, and opponents, including the National Council of Canadian Muslims, are hoping to have the whole thing struck down.

Within Quebec, opposition to the law is sometimes cast as a case of English-speaking Canadians misunderstanding or ignoring the culture and needs of French-speaking Quebecers. But Mr. Farooq dismissed that idea.

“Anybody who makes what’s happening right into an Anglo versus Franco issue — that’s disgusting, that’s not what this is about,” he said. “This is about the basic dignity of every human being who walks in this land.”

A native of Windsor, Ontario, Ian Austen was educated in Toronto, lives in Ottawa and has reported about Canada for The New York Times for the past 16 years. Follow him on Twitter at @ianrausten.

How are we doing?
We’re eager to have your thoughts about this newsletter and events in Canada in general. Please send them to nytcanada@nytimes.com.

Like this email?
Forward it to your friends, and let them know they can sign up here.