German Conservatives Appear to Lead in Last State Election Before... 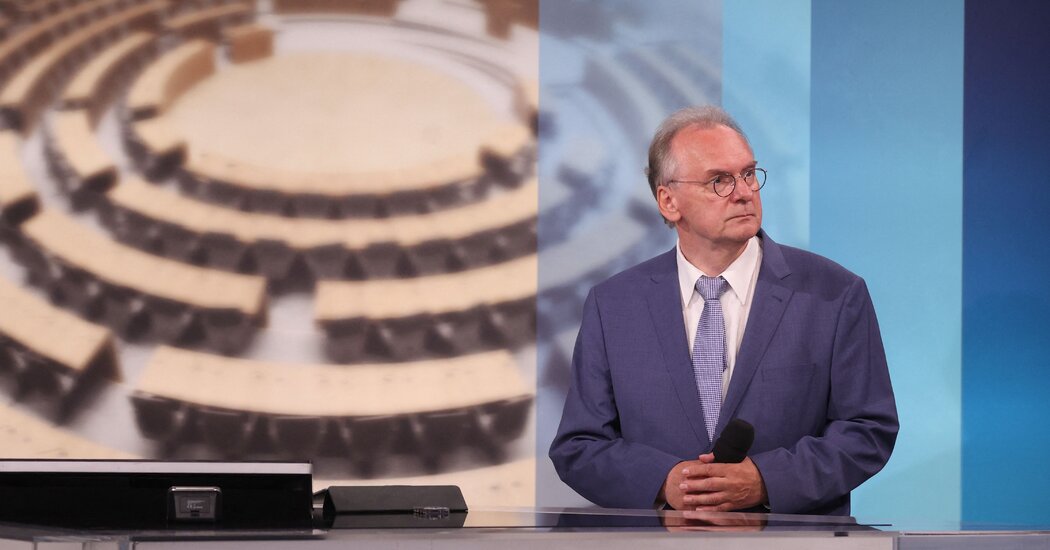 BERLIN — Voters in the eastern German state of Saxony-Anhalt appeared in a Sunday vote to support a return of the ruling conservatives, which made strong gains in a contest that had been closely watched for signs of a far-right party’s strength months ahead of a national election.

Initial partial returns suggested that the conservative Christian Democratic Union were poised to break a losing streak in state ballots and expand their past margins over the nationalist Alternative for Germany, or AfD.

Although Saxony-Anhalt is one of the country’s smallest states, with only 1.8 million people eligible to cast ballots, many Germans were looking to Sunday’s vote for indications about the national election for a new Parliament on Sept. 26.

The outcome on Sunday could bolster the campaign of Armin Laschet, the current leader of the Christian Democrats, who is hoping to replace Angela Merkel. She is stepping down after 16 years in office as chancellor.

Mr. Laschet, 60, the governor of North Rhine-Westphalia, has struggled to gain traction across the country, especially in the states of the former East Germany, and the strong showing for his party in the last regional election before the national ballot could give his contest a boost.

“Today is a clear win for the Christian Democrats,” said Volker Bouffier, the governor of the western state of Hesse and a senior member of the conservative party. “But the fight is still at the beginning, the fight for the democratic center.”

Despite the conservatives’ apparent ability to attract more support, the early partial returns suggested that AfD remained firmly the second most popular party in the state, a position it won five years ago when it received nearly a quarter of votes in the Saxony-Anhalt state election, shocking the country and propelling the party from the far-right nationalist fringe onto the national stage.

Since then, Alternative for Germany has struggled to contend with a more extremist wing that has pulled the party branch in Saxony-Anhalt even further to the right, capturing the attention of the country’s domestic intelligence service. The state’s leaders in the party, along with those from the branches in Brandenburg and Thuringia, are under official scrutiny for their anti-Semitic and anti-Muslim statements. Whether the AfD at the national level will also be placed under observation is on hold, pending the outcome of a legal challenge.

While much about the Saxony-Anhalt contest is unique to the region, heavily focused on local issues like schools and economic restructuring, a majority of voters told pollsters with infratest.dimap on Sunday they were satisfied with the work of their governor, Reiner Haseloff, a member of the Christian Democrats who sought to clearly distance his party from the AfD.

“I am thankful that our image remains, we have a reputation of democracy here in Saxony-Anhalt that we upheld tonight,” Mr. Haseloff said after initial projections had shown his party the clear winner of the evening.

Mr. Haseloff has been a strong champion of the states in eastern Germany, home to many regions that are still struggling with the fallout from economic restructuring more than 30 years after the fall of the Berlin Wall.

The persistent lack of jobs and economic infrastructure in those states, and a feeling that traditional parties do not take their concerns seriously, were other key factors that led many voters to shift their support to the AfD five years ago. That result forced Mr. Haseloff to form a coalition government across a wide political spectrum, including the center-left Social Democrats as well as the environmentalist Greens, in an effort to keep the far-right in the opposition.

On Sunday, the Social Democrats suffered one of their worst showings in a state election, while the Greens were able to gain marginal support in the region, where they have traditionally struggled to attract voters.

The other winner of the state ballot, along with the conservatives, appeared to be the pro-business Free Democratic Party, which voters returned to the statehouse for the first time in a decade.