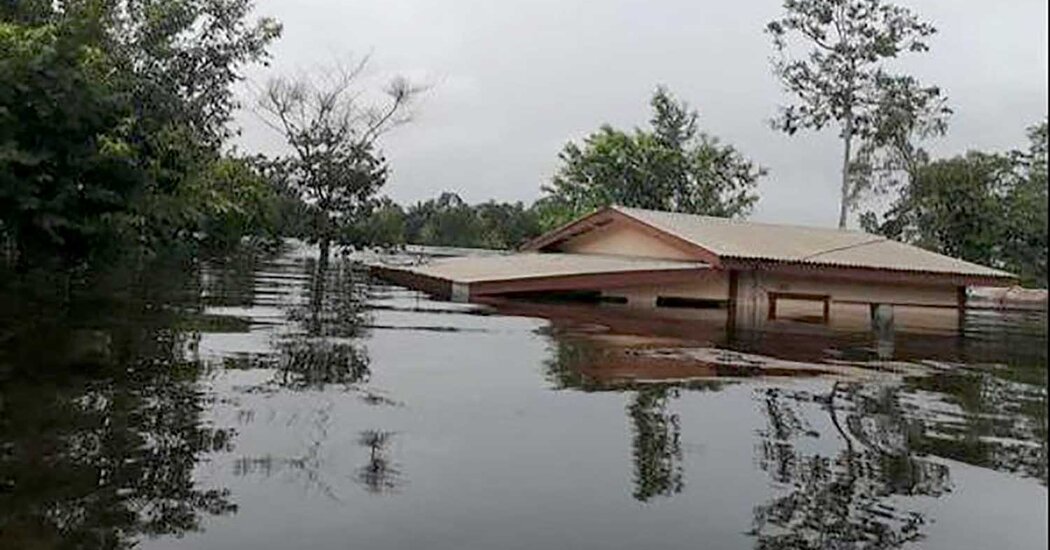 More than 6,900 households across the country have been severely affected by the flooding in the past several weeks, according to government estimates.

One video taken from a boat shows water stretching for what appears to be miles along a waterfront road, reaching more than halfway up two-story houses.

“This is madness,” a woman says in the video, adding that she has never seen such flooding in more than 60 years of living in the Kwakwani section of Guyana.

Officials have said that the flooding could exacerbate the spread of the coronavirus and lead to other health problems if residents can’t find clean food and water. The destruction of crops, homes and livestock could also lead to economic devastation for some families in the hard-hit regions of the country, one of South America’s poorest. Bordering the Atlantic Ocean, between Suriname and Venezuela, Guyana is home to about 790,000 residents.

Forecasts suggest that the heavier-than-normal rainy season — which has already been blamed for the severe flooding — could continue into July.

“From the government’s side, we recognize this as a disaster because several communities are affected across the country,” Mark Phillips, the prime minister, said in a statement on Sunday. “In Kwakwani, it is really bad.”

Narendra Itwaru, a rice farmer in Mora Point, told News Room, a Guyanese news outlet, that he had lost 210 bags of rice as well as a refrigerator, a wardrobe, cupboards and a number of electrical items.

Government officials said they had distributed 15,000 bags of food and sanitary supplies and had opened shelters to accommodate families that had been forced from their homes. Five of the eight government shelters were occupied as of Wednesday, officials said.

The government said that Exxon Mobil, which began to sell the first cargoes of Guyanese oil last year after making a bet on the country’s offshore oil supply, had donated about $50,000 to relief efforts.

Over the last 15 days, he said, the commission has deployed teams to assess the damage and has confirmed that many areas remain inundated.

Even when the tide has been at its lowest, he said, many flooded areas have not been draining, a problem that he blamed, in part, on insufficient infrastructure. He said residents in farming communities had reported lost crops and livestock.

During a visit to one flooded community, Zulfikar Mustapha, the minister of agriculture, pledged to install pumps and to help farmers who had lost crops and livestock. He said the government could not provide financial compensation but could help with materials and other assistance.