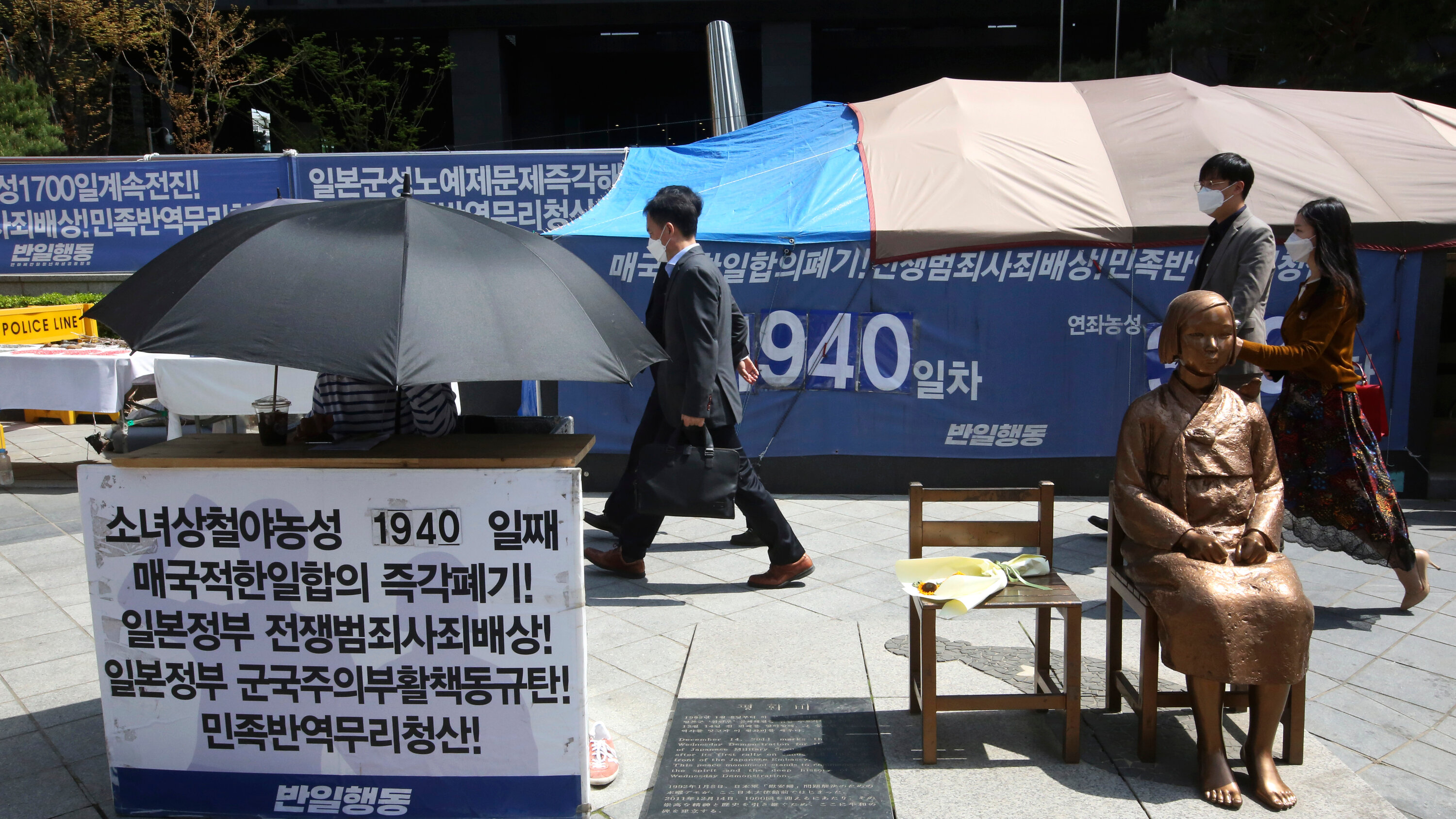 SEOUL — A judge in South Korea ruled on Wednesday that Korean women who were forced into sexual slavery by Japan during World War II cannot seek compensation from the Japanese government in a South Korean court, a decision that angered survivors and contradicted an earlier ruling in January.

In the earlier verdict, the presiding judge ordered the Japanese government to pay 100 million won ($89,400) each to 12 former Korean sex slaves, known as “comfort women.”

The two different decisions by two different judges in the Seoul Central District Court complicated the survivors’ decades-long effort to hold the Japanese government legally accountable for wartime sexual slavery. The two rulings also showed that the South Korean judiciary was divided over Japan’s claim that international law shielded it from lawsuits in foreign courts.

In January, the South Korean judge ruled that the Japanese government should be subject to Korean jurisdiction because the experience of Korean sex slaves involved “anti-humanity acts systematically planned and perpetrated by the Japanese Empire.” For such acts, Japan cannot claim exemption from a lawsuit in South Korea based on state sovereignty, he said.

The group of women in that case hailed the judge’s decision as a landmark victory, but Tokyo rejected the ruling. It also said that a 2015 agreement, which South Korea and Japan called “final and irreversible,” permanently settled the long-running dispute over comfort women. Previously, in a 1993 statement, Japan issued a formal apology for the practice.

On Wednesday, a different South Korean judge, Min Seong-cheol, sided with Japan and threw out the lawsuit filed by a separate group of former sex slaves. If courts start making exceptions to the principle of national sovereignty, “diplomatic clashes become inevitable,” the judge said in his ruling. Mr. Min also cited the 2015 agreement, under which Japan acknowledged responsibility for its actions, apologized anew to the women and set up an $8.3 million fund to help provide old-age care for survivors.

Some of the surviving women have accepted payments from the 2015 fund. Others rejected the agreement, saying that it failed to specify Japan’s “legal” responsibility or to provide official reparations. The lawsuit thrown out on Wednesday was filed in 2016 by 20 plaintiffs, including 11 former sex slaves. Only four of the 11 are still alive, and all of them are in their 80s or 90s.

Neither the ruling in January nor the one on Wednesday is the final say on the matter. The plaintiffs in the second lawsuit said they would seek the opinion of higher courts by appealing Wednesday’s decision.

“It will go down in history as a shameful case where the judge shirked his duty as a last bastion of human rights,” said an advocacy group in Seoul that speaks for the women who filed the lawsuit. Lee Yong-soo, a former sex slave who joined the lawsuit, accused the judge of denying the victims “the right to seek judgment on war crimes and anti-humanity crimes,” according to a statement from her spokeswoman. Ms. Lee also demanded that both governments ask the International Court of Justice to rule on the case.

“Comfort women” is the euphemism Japan adopted for the nearly 200,000 young women — many of them Korean — who were forced or lured into working in brothels run by the Japanese military before and during World War II. Over the last 30 years, survivors from South Korea, Taiwan, the Philippines, China and the Netherlands have filed a total of 10 lawsuits against the Japanese government in Japanese courts, according to Amnesty International.

The survivors lost in all of those cases before winning their case in the South Korean court in January.

“What was a landmark victory for the survivors after an overly long wait is again now being called into question,” Arnold Fang, researcher for East Asia at Amnesty International, said in criticizing Wednesday’s court decision. “More than 70 years have passed since the end of World War II, and we cannot overstate the urgency for the Japanese government to stop depriving these survivors of their rights to full reparation and to provide an effective remedy within their lifetimes.”

In Tokyo, Katsunobu Kato, chief cabinet secretary to Prime Minister Yoshihide Suga, said the Japanese government planned to review the ruling in detail before commenting on it. He added that his government could not answer whether the new decision reflected a change in South Korea’s stance on the issue, but that “Japan’s attitude doesn’t change at all.”

Washington has urged Seoul and Tokyo to improve ties so that the allies can work more closely to address North Korea’s nuclear threat and China’s growing military influence in the region. For years, Japan and South Korea have locked horns over comfort women and other historical issues stemming from Japan’s colonial rule of Korea from 1910 to 1945.

Tokyo insisted that all claims arising from its colonial rule, including those involving sexually enslaved women, had been settled by the 1965 treaty that established diplomatic relations between the two nations, as well as the 2015 comfort women agreement. Under the 1965 agreement, Japan provided South Korea with $500 million in aid and affordable loans.

The South Korean government did not immediately comment on Wednesday’s court ruling. But during a forum in Seoul on Wednesday, Foreign Minister Chung Eui-yong said that, although his government had not abandoned the 2015 deal, the victims and their demands must be “at the center” of any effort to resolve the issue.