Rise of Variants in Europe Shows How Dangerous the Virus... 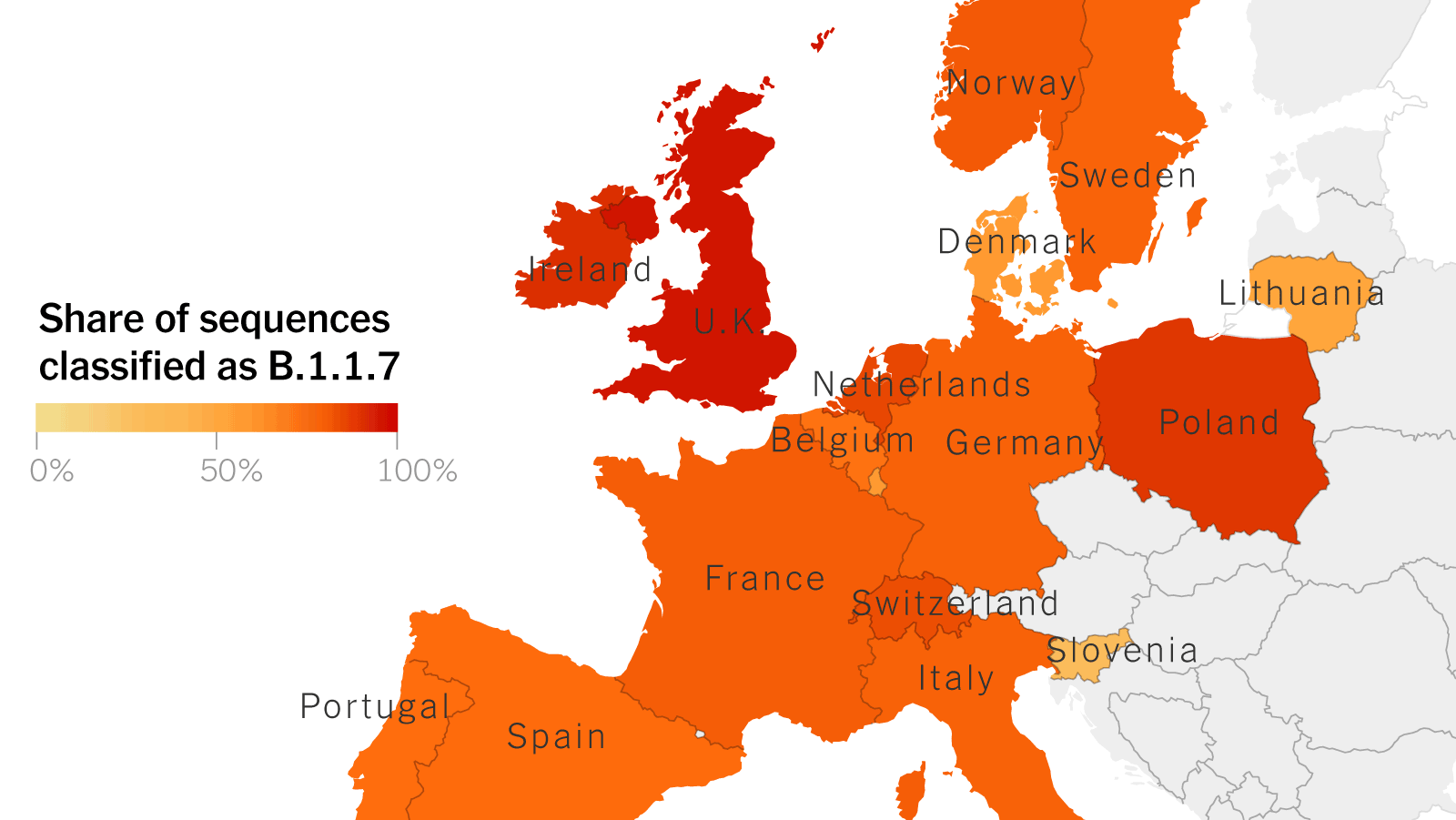 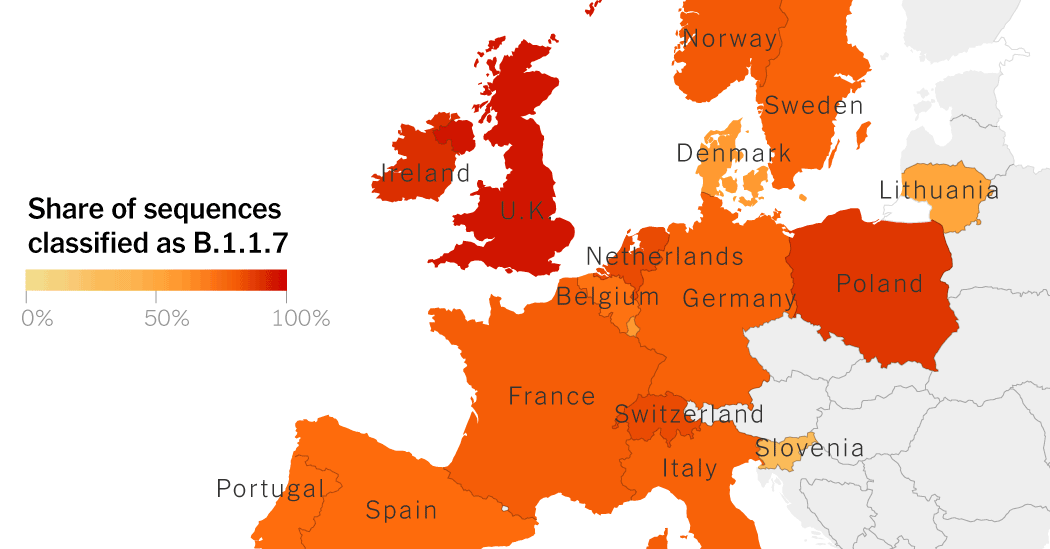 Europe, the epicenter of the coronavirus pandemic last spring, has once again swelled with new cases, which are inundating some local hospitals and driving a worrisome global surge of Covid-19.

But this time, the threat is different: The rise in new cases is being propelled by a coronavirus variant first seen in Britain and known as B.1.1.7. The variant is not only more contagious than last year’s virus, but also deadlier.

Source: CoVariants.org | Note: Dates refer to the weekly total beginning on that day. Only European countries with substantial sequencing data are shown. Sequencing rates vary between countries and sometimes reflect localized trends based on testing from a particular region or hospital. Map shows the latest available data on the specified date, which may be lagged.

The variant is now spreading in at least 114 countries. Nowhere, though, are its devastating effects as visible as in Europe, where thousands are dying each day and countries’ already-battered economies are once again being hit by new restrictions on daily life.

Even as the variant surged in Britain starting in December, it was also seeding outbreaks across the continent, many of them unnoticed behind an overall drop in cases. Those variant-heavy outbreaks have since ballooned, and the variant has now crowded out other versions of the virus, becoming dominant in more than a dozen European countries.

Other variants of concern besides B.1.1.7 are also present in Europe. B.1.351, the variant first detected in South Africa, has been found to reduce the effectiveness of some vaccines, including AstraZeneca’s, which is being widely used across the continent.

And P.1, the variant that has driven hospitals in Brazil to the breaking point, appears to be more contagious than the original form of the virus and also contains a mutation that diminishes the vaccines’ effectiveness.

Share of coronavirus sequences that are variants of concern

B.1.351 First detected in South Africa

Source: CoVariants.org | Note: Only countries with substantial sequencing data are shown. Variants shown on the charts reflect countries that have reported at least 130 sequences of that variant.

Despite watching the B.1.1.7 variant wallop Britain, lawmakers in continental Europe were slow to react. In late January, President Emmanuel Macron of France defied calls from his scientific advisers for new restrictions. Now daily cases have doubled, hospitals are swelling with patients and Mr. Macron has imposed a third national lockdown.

“What’s surprising to me is how many countries didn’t anticipate what B.1.1.7 would bring,” said Devi Sridhar, a professor of global public health at the University of Edinburgh in Scotland. “People underestimated it, instead of saying we should learn from what’s happening in the U.K.”

What happened this winter in the U.K. was mass death and deluged hospitals on a scale not seen earlier in the pandemic. Since B.1.1.7 was first sampled in late September, 85,000 people have died. Four million people — one out of every 17 Britons — have recorded infections.

In some ways, Europe is better prepared. Countries began sequencing virus samples more aggressively in January and February. Despite supply hiccups and a safety scare with AstraZeneca, about 14 percent of the population has received at least one dose of a vaccine. The vaccines offer robust protection from B.1.1.7. And new cases across Europe have dipped slightly in recent days.

But a vast majority of people remain susceptible. And once people become largely protected from B.1.1.7, scientists fear, other variants could gain an upper hand by partly sidestepping immune responses.

That is why France has tried to stop B.1.351 from gaining a foothold in the country’s east by accelerating vaccinations there. All of the leading vaccines are expected to prevent serious disease and death from any of the variants, making any future waves in heavily vaccinated countries less deadly.

“I think we will eventually control B.1.1.7 in the U.K. with vaccination,” said Nicholas Davies, an assistant professor of mathematical modeling at the London School of Hygiene and Tropical Medicine. “But at that point, it’s unfortunately not unrealistic that another variant with some properties that allow it to evade immune responses or vaccine protection would start to become more dominant.”

No two countries are in precisely the same situation. Poland’s rate of new cases has quintupled since mid-February, forcing the closure of most public venues. Germany’s has doubled, triggering a ban on nighttime gatherings in Berlin.

Cases increased in 20 countries in the past 28 days

Cases stayed flat in 12 countries in the past 28 days

Cases decreased in 7 countries in the past 28 days

Vaccines will eventually defeat the variants, scientists say. And stringent restrictions can drive down cases of B.1.1.7. They have done so not only in Britain, but also in Ireland and Portugal, which were hit by the variant soon after Britain and have since begun to gradually reopen.

But even those countries are not out of the woods yet. “We need to make sure we unlock very slowly, and make sure vaccines increase and cover as many people as possible, including kids,” said Stephen Griffin, a virologist at the University of Leeds in Britain.

The variant is believed to be about 60 percent more contagious and 67 percent deadlier than the original version of the virus. That makes the battle to contain it slower and more difficult, scientists said.

“We’ve seen in so many countries how quickly it can become dominant,” said Lone Simonsen, a professor and director of the PandemiX Center at Roskilde University in Denmark. “And when it dominates, it takes so much more effort to maintain epidemic control than was needed with the old variant.”