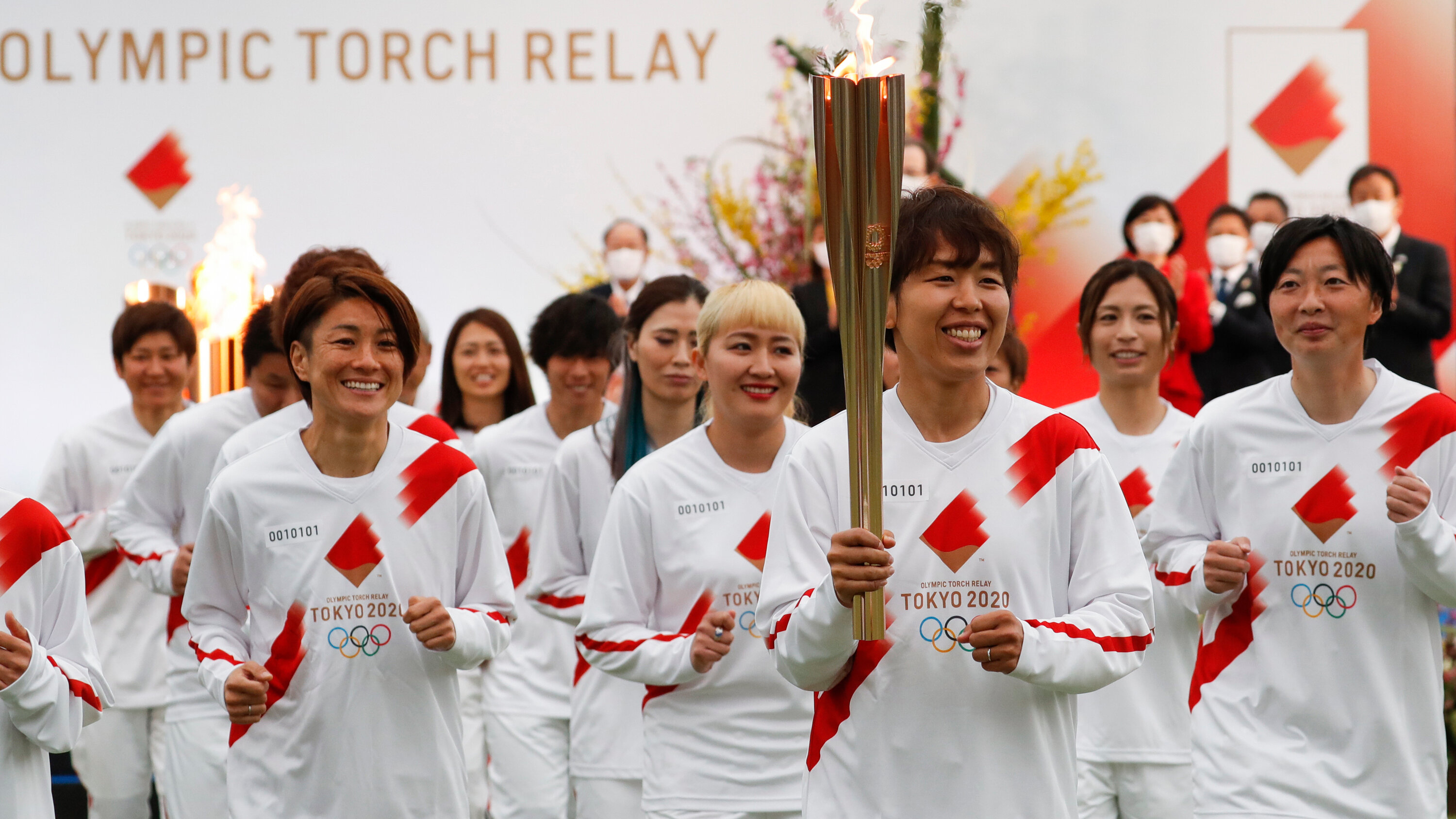 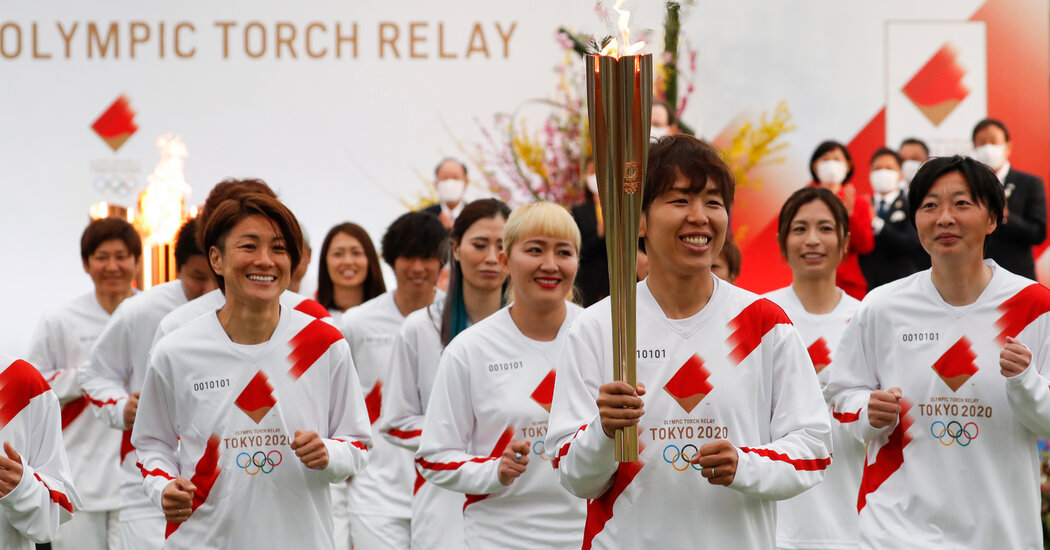 FUKUSHIMA, Japan — When Bruna Noguchi signed up to be a torchbearer for the Tokyo Olympics a year and a half ago — before the coronavirus pandemic, before the resignations of two top officials over sexist remarks — she never dreamed it could be a controversial decision.

But as the relay kicked off on Thursday morning in Fukushima Prefecture, the ceremony and those participating in it were at the center of a national debate, with many questioning whether the Games should go on in spite of the virus, the ballooning costs and other growing challenges.

While more than three dozen people, including about 20 celebrities, have withdrawn from the relay, Ms. Noguchi, 22, has decided to participate. She is one of 10,000 people who will carry the torch over the next four months, from Fukushima to Okinawa in the far south to Hokkaido in the north and on to the Olympic Stadium in Tokyo.

“I can understand the feelings of the people who have decided to withdraw from the relay,” Ms. Noguchi, who is from Gunma Prefecture, northwest of Tokyo, said in a recent interview. “But I’m not worried.”

The Japanese authorities had envisioned the start of the torch relay as a triumphant moment, and their choice of Fukushima as the launching point was heavily symbolic. Japan is calling these Games the “Recovery Olympics,” highlighting the country’s recovery from the 2011 earthquake, tsunami and nuclear disaster that ravaged Fukushima and other parts of northeastern Japan, as well as the world’s recovery from the coronavirus pandemic.

Seiko Hashimoto, president of the Tokyo organizing committee, said that it was “very meaningful” that the relay would start in Fukushima and that she wished for “the entire world to take a look at the reconstruction done in East Japan.”

“Everyone has to feel safe and secure — that is the top priority,” Ms. Hashimoto said during a news conference last week.

But the celebration on Thursday was subdued, and the relay was being carried out under a number of restrictions. Traditional Japanese drummers and a hula dance group opened the ceremony, performing before a group of around 150 attendees, who sat at socially distanced intervals and applauded politely.

The Olympic flame was lit in Greece last March and has been kept burning in Japan during the last year of pandemic. As a few celebrities took to the stage to deliver brief speeches ahead of the torch’s departure, one of them made a nod to the controversy over the relay, noting that there had been “many opinions” about whether to participate.

Members of Nadeshiko Japan, the country’s World Cup-winning women’s soccer team, carried the torch for the first few hundred yards of the relay as a small group of reporters and dignitaries looked on.

After the first wave of the pandemic forced a yearlong delay of the Olympics, the Japanese government argues that it is now ready to hold the Games.

Many in Japan, however, remain worried that the virus has yet to run its course, and that the Games and surrounding events risk worsening the country’s comparatively mild experience of the pandemic. Reported coronavirus deaths remain under 9,000, but the country is still recording over 1,000 cases each day, and health experts warn that a fourth wave is in sight.

The authorities ended a nearly three-month state of emergency in the Tokyo region on Sunday. In a poll by the Asahi newspaper, over 50 percent of respondents said that it had been lifted too early. Some Twitter users accused Prime Minister Yoshihide Suga, who has faced a backlash for his insistence on holding the Games despite widespread public opposition, of timing the decision for the start of the torch relay.

Case numbers have surged in recent weeks in Miyagi and Yamagata Prefectures in the Tohoku region of Japan, which also includes Fukushima Prefecture, and a local state of emergency was declared last week.

Tatsuya Maruyama, the governor of Shimane Prefecture, in western Japan, said early last month that it was “difficult to cooperate” with the torch relay and the Tokyo Games because of the coronavirus situation.

He is not the only one wary about the events. In addition to the celebrity withdrawals, Mr. Suga himself will not attend the relay, saying that he had come to the decision “after comprehensively considering parliamentary schedules.”

On Thursday morning, Mr. Suga said from Tokyo that “this is a valuable opportunity to make the public realize that the Olympics and Paralympic Games are fast approaching.”

Several of the high-profile pullouts occurred just before the start of the relay. Norio Sasaki, the coach who led the national women’s soccer team to the World Cup victory in 2011, said on Wednesday that the captain of that team, Homare Sawa, had withdrawn because of health reasons. Ms. Sawa had been expected to be the first torchbearer for the Japan leg of the relay.

Rina Akiyama, a Paralympic gold medalist, pulled out over concerns about the coronavirus. She has been one of the few high-profile participants to clearly cite the pandemic as the reason for withdrawing.

“I didn’t withdraw to influence society’s opinions on the Games, but because I chose to withdraw, I thought that people would be keen to know why,” she said in an interview on Tuesday, adding, “I wanted to tell the truth.”

On Thursday morning, when the torch left J-Village — a reconstructed soccer stadium that served as a base for nuclear recovery operations during the Fukushima disaster — it was under circumstances that the government had not planned for last year.

Hoping to curb the virus, the authorities have placed many restrictions on the torch relay. The grand ceremony on Thursday and the first section of the relay were closed to the public. Routes will not be announced until 30 minutes before the start time, and spectators can attend the relay only in their home prefectures.

No cheering or shouting is allowed, and fans must offer “support with applause or using distributed goods.” The relay will be live-streamed by NHK, Japan’s public broadcaster.

Despite the precautions, some people in Fukushima said they were still worried. Shuhei Ohno, 34, a chef in Koriyama, said he feared that the torch relay may “raise the infection risk” nationwide.

“The vaccine hasn’t spread widely enough in Japan yet, so how can there already be plans to host the Olympics?” he said.

Still, the organizers are pressing ahead. Over the next 121 days, Ms. Noguchi, the runner from Gunma, and her fellow torchbearers will trot across Japan’s 47 prefectures, including islands off the coast of Tokyo, before completing the torch’s journey on July 23, the day of the opening ceremony.

Ms. Noguchi remains sanguine. She wishes to use her 200-meter run with the torch later this month to thank the community that raised her, as well as to bring hope after a year plagued by an increase in suicides, economic hardship and intense sacrifices by health care workers.

Although the authorities seem determined to hold the Games, Ms. Noguchi acknowledged that if the coronavirus situation worsened severely between now and July, it could still force a postponement or cancellation.

“At least in that case, I was still able to run in the torch relay,” she said.