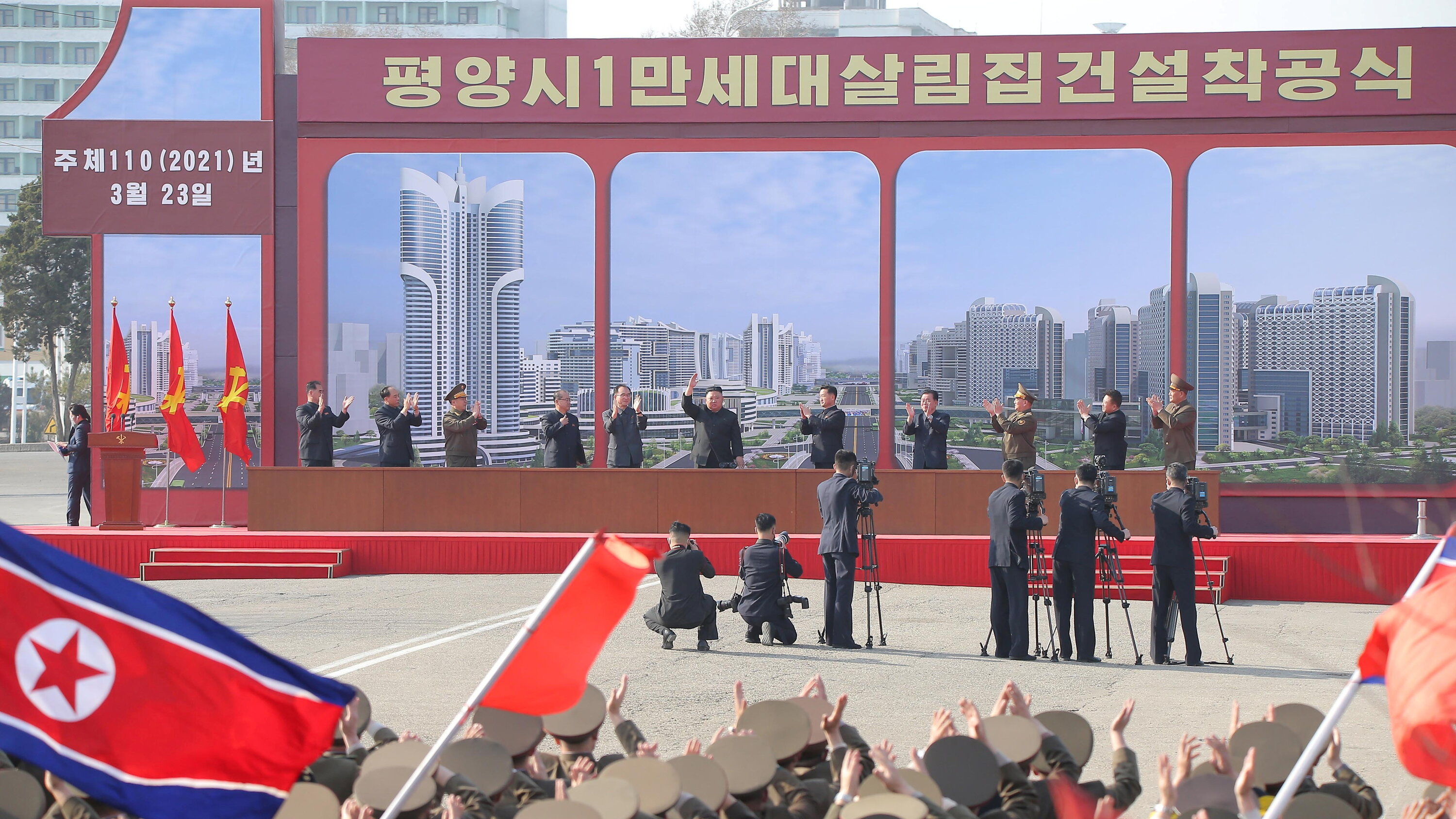 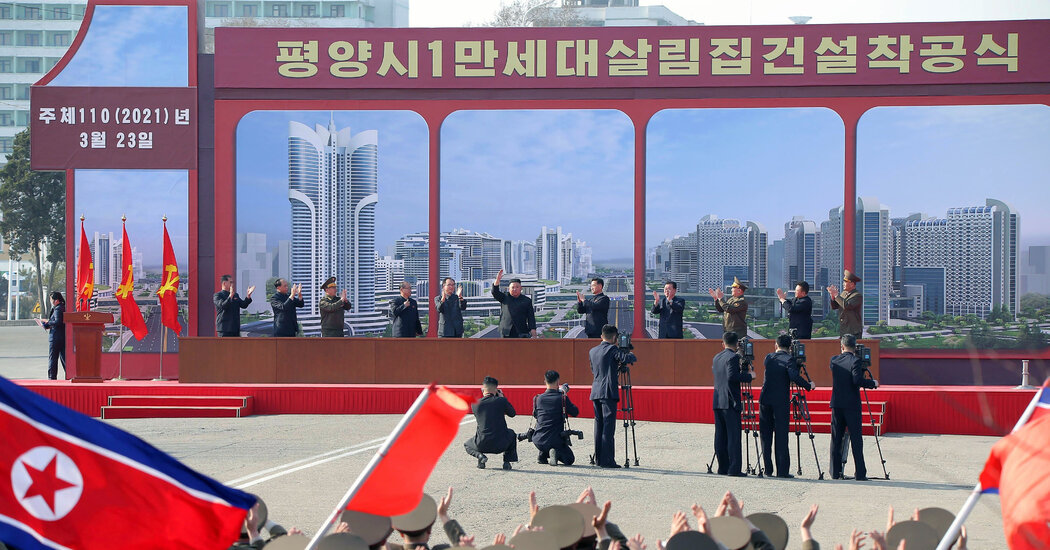 “It threatens the peace and security of Japan and the region, and is a violation of United Nations resolutions,” the Japanese leader said on Twitter, referring to the United Nations Security Council’s ban on the North’s developing and testing ballistic missile technologies. “I strongly protest and strongly condemn it.”

The missiles dropped into waters between North Korea and Japan and outside Japan’s exclusive economic zone, Mr. Suga said. The Japanese military said that the missiles flew 280 miles, reaching a height of 62 miles.

South Korean authorities were analyzing the data collected from the launch to determine the type of projectile, the country’s military said in a brief statement. The South Korean military uses the term “unidentified projectile” when it cannot immediately determine if the object was a ballistic missile.

The earlier test took place off the west coast of North Korea on Sunday, just days after the country had accused the United States and South Korea of raising “a stink” on the Korean Peninsula with their annual military drills.

North Korea’s weapons program has been a thorny problem for the past four U.S. presidents. Each approached the country with different incentives and sanctions, but all failed to persuade it to stop building nuclear warheads and the missiles to deliver them.

North Korea’s weapons program has advanced quickly. In 2017, the North fired missiles over Japan and threatened to launch an “enveloping” strike near the U.S. territory of Guam.

Despite three face-to-face meetings, the leaders were unable to reach an agreement, depriving Mr. Trump of what he had hoped would be a crowning foreign policy achievement. Instead, the failed summits gave Mr. Kim more time to further develop his weapons, experts say.

Analysts are closely watching Washington to see if Mr. Biden’s approach to North Korea will follow that of former President Barack Obama, rather than the more direct engagement of Mr. Trump.

The Biden administration has been studying how to deal with North Korea, which Secretary of State Antony J. Blinken has called “a hard problem.” When Mr. Blinken was in Seoul last week, he said the Biden administration planned to complete a North Korea policy review in the coming weeks in close coordination with South Korea and Japan. He said the review included both “pressure options and potential for future diplomacy.”

During the first months of his presidency, Mr. Obama was also greeted by a North Korean provocation when the country detonated a nuclear bomb. Rather than negotiate, Mr. Obama opted for a policy of “strategic patience,” which meant gradually escalating sanctions. In his Senate confirmation hearing, Mr. Blinken said the Biden administration would “review the entire approach and policy toward North Korea, because this is a hard problem.”

In the weekend test, missiles were launched from a site near Nampo, a port southwest of Pyongyang, the North Korean capital, said Ha Tae-keung, a South Korean lawmaker who was briefed by intelligence officials on Wednesday.

When North Korea launches missile tests, they are usually celebrated through the state news media and quickly confirmed by the South Korean military. ​But the North Korean news media did not report on Sunday’s test and has yet to report on Thursday’s launch. South Korean officials​ said Wednesday that they had​ detected the test when it occurred, but decided not to immediately report on it. They did not elaborate on their decision.

South Korean defense officials tend to consider short-range cruise missile tests less of a provocation than ballistic launches. They also tend not to highlight what they consider minor provocations from the North when trying to promote inter-Korean dialogue.

North Korea’s projectile launch on Thursday came a day after senior Biden administration officials sought to play down the significance of the weekend missile test, which they said was part of “normal military activity” and was on “the low end” of a provocation level. President Biden himself appeared to dismiss the earlier test, telling reporters that “there’s no new wrinkle in what they did.”

Officials and analysts in the region have been watching North Korea closely to see if the country would seek to step up tensions to gain leverage ahead of possible negotiations with the Biden administration. North Korea conducted its last ballistic missile test in March last year when it launched two missiles off its east coast.

A new ballistic missile would indicate that the country was once again defying U.N. resolutions and was continuing to develop its arsenal of ballistic missiles, some of which it said were designed to carry nuclear warheads.

North Korea has rebuffed any serious dialogue with Washington since the second summit between its leader, Kim Jong-un, and President Trump ended abruptly in Hanoi, Vietnam, in February 2019. They met again briefly on the North-South Korean border in June that same year but failed to narrow their differences.

Pyongyang has made several hostile statements toward the United States in recent days, and analysts said the missile test might be part of a subtle pressure tactic, raising the possibility that North Korea will revert to a new cycle of tensions on the peninsula to squeeze concessions out of Washington.

The Biden administration has stepped up efforts to work more closely with its regional allies, South Korea and Japan, to better handle North Korea’s growing weapons capabilities, as well as a rising China. Mr. Blinken and Secretary of Defense Lloyd J. Austin III visited Seoul and Tokyo last week as part of the administration’s first high-level diplomatic tour of Asia.

But North Korea said that it felt no need to respond to recent attempts by the Biden administration to open a dialogue, dismissing them as a “delaying-time trick.” In a message to President Xi Jinping of China, North Korea’s leader, Mr. Kim, stressed the need to strengthen the unity between the two countries in order to “cope with the hostile forces.”

In a party meeting in January, Mr. Kim vowed to further advance his country’s nuclear capabilities, declaring that it would build new solid-fuel I.C.B.M.s and make its nuclear warheads lighter and more precise.