Virus Variant in Brazil Infected Many Who Had Already Recovered... 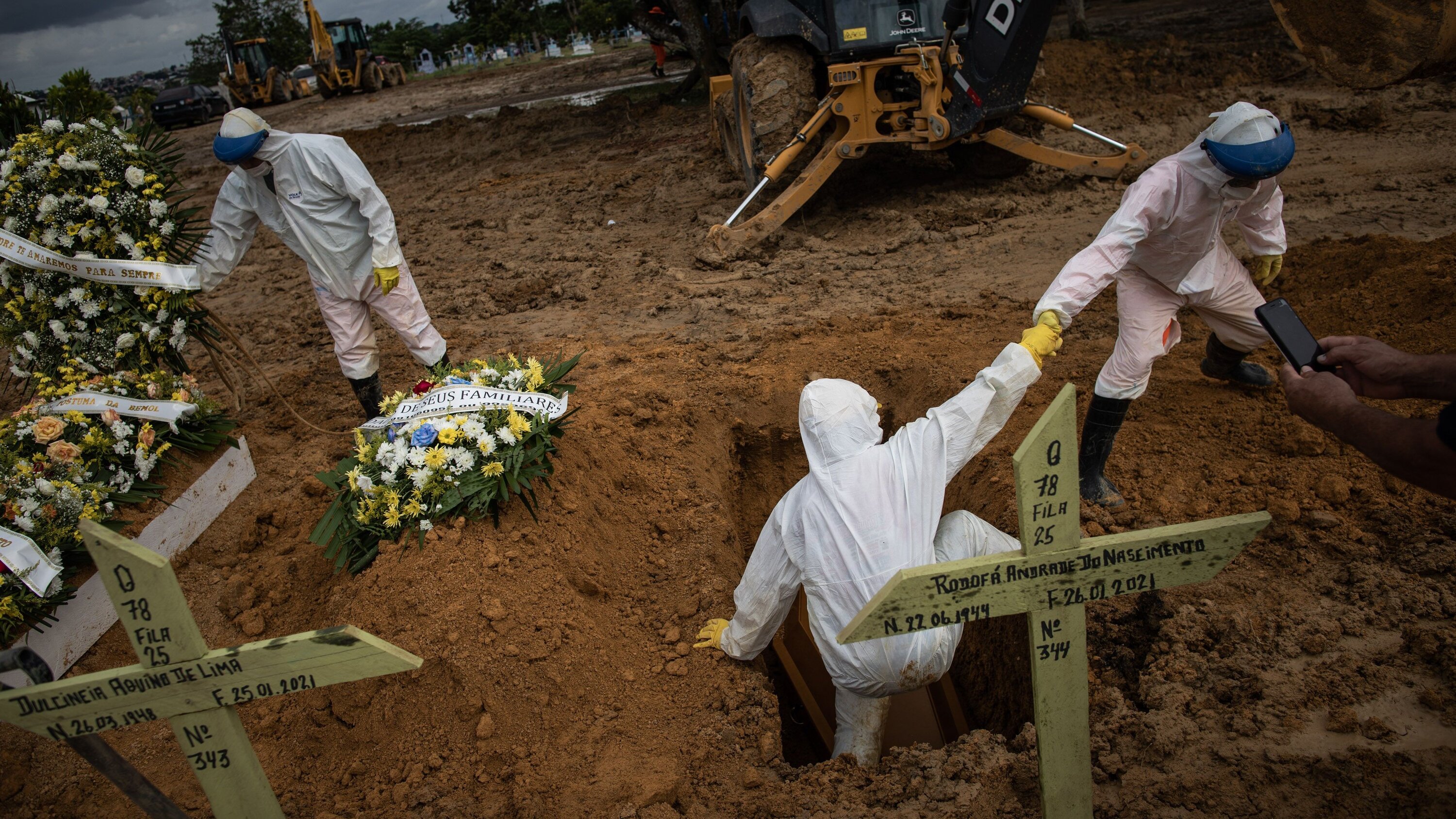 In just a matter of weeks, two variants of the coronavirus have become so familiar that you can hear their inscrutable alphanumeric names regularly uttered on television news.

B.1.1.7, first identified in Britain, has demonstrated the power to spread far and fast. In South Africa, a mutant called B.1.351 can dodge human antibodies, blunting the effectiveness of some vaccines.

Scientists have also had their eye on a third concerning variant that arose in Brazil, called P.1. Research had been slower on P.1 since its discovery in late December, leaving scientists unsure of just how much to worry about it.

“I’ve been holding my breath,” said Bronwyn MacInnis, an epidemiologist at the Broad Institute.

Now three studies offer a sobering history of P.1’s meteoric rise in the Amazonian city of Manaus. It most likely arose there in November and then fueled a record-breaking spike of coronavirus cases. It came to dominate the city partly because of an increased contagiousness, the research found.

But it also gained the ability to infect some people who had immunity from previous bouts of Covid-19. And laboratory experiments suggest that P.1 could weaken the protective effect of a Chinese vaccine now in use in Brazil.

The new studies have yet to be published in scientific journals. Their authors caution that findings on cells in laboratories do not always translate to the real world, and they’ve only begun to understand P.1’s behavior.

“The findings apply to Manaus, but I don’t know if they apply to other places,” said Nuno Faria, a virologist at Imperial College London who helped lead much of the new research.

But even with the mysteries that remain around P.1, experts said it is a variant to take seriously. “It’s right to be worried about P.1, and this data gives us the reason why,” said William Hanage, an epidemiologist at the Harvard T.H. Chan School of Public Health.

P.1 is now spreading across the rest of Brazil and has been found in 24 other countries. In the United States, the Centers for Disease Control and Prevention has recorded six cases in five states: Alaska, Florida, Maryland, Minnesota and Oklahoma.

To reduce the risks of P.1 outbreaks and reinfections, Dr. Faria said it was important to double down on every measure we have to slow the spread of the coronavirus. Masks and social distancing can work against P.1. And vaccination can help drive down its transmission and protect those who do get infected from severe disease.

“The ultimate message is that you need to step up all the vaccination efforts as soon as possible,” he said. “You need to be one step ahead of the virus.”

Dr. Faria and his colleagues started tracking the coronavirus when it exploded in Brazil last spring. Manaus, a city of two million in the Brazilian Amazon, was hit particularly hard. At its springtime peak, the cemeteries of Manaus were overwhelmed by the bodies of the dead.

But after a peak in late April, Manaus seemed to have gotten past the worst of the pandemic. Some scientists thought that the drop meant Manaus had gained herd immunity.

Dr. Faria and his colleagues looked for coronavirus antibodies in samples from a Manaus blood bank in June and October. They determined that roughly three-quarters of the residents of Manaus had been infected.

But near the end of 2020, new cases began surging again. “There were actually far more cases than in the previous peak of cases, which had been in late April,” Dr. Faria said. “And that was very puzzling to us.”

To search for variants, Dr. Faria and his colleagues started a new genome sequencing effort in the city. While B.1.1.7 had arrived in other parts of Brazil, they didn’t find it in Manaus. Instead, they found a variant no one had seen before.

Many variants in their samples shared a set of 21 mutations not seen in other viruses circulating in Brazil. Dr. Faria sent a text message to a colleague: “I think I’m looking at something really strange, and I’m quite worried about this.”

A few mutations in particular worried him, because scientists had already found them in either B.1.1.7 or B.1.351. Experiments suggested that some of the mutations might make the variants better able to infect cells. Other mutations let them evade antibodies from previous infections or produced by vaccines.

Dr. Faria and his colleagues posted a description of P.1 on an online virology forum on Jan. 12. They then investigated why P.1 was so common. Its mutations may have made it more contagious, or it might have been lucky. By sheer chance, the variant might have shown up in Manaus just as the city was getting more relaxed about public health measures.

It was also possible that P.1 became common because it could reinfect people. Normally, coronavirus reinfections are rare, because the antibodies produced by the body after infection are potent for months. But it was possible that P.1 carried mutations that made it harder for those antibodies to latch onto it, allowing it to slip into cells and cause new infections.

The researchers tested these possibilities by tracking P.1 from its earliest samples in December. By early January, it made up 87 percent of samples. By February it had taken over completely.

Combining the data from genomes, antibodies and medical records in Manaus, the researchers concluded that P.1 conquered the city thanks not to luck but biology: Its mutations helped it spread. Like B.1.1.7, it can infect more people, on average, than other variants can. They estimate it is somewhere between 1.4 and 2.2 times more transmissible than other lineages of coronaviruses.

But it also gets an edge from mutations that let it escape antibodies from other coronaviruses. They estimate that in 100 people who were infected with non-P.1 lineages in Manaus last year, somewhere between 25 and 61 of them could have been reinfected if they were exposed to P.1 in Manaus.

The researchers found support for this conclusion in an experiment in which they mixed P.1 viruses with antibodies from Brazilians who had Covid-19 last year. They found that the effectiveness of their antibodies dropped sixfold against P.1 compared with other coronaviruses. That drop might mean that at least some people would be vulnerable to new infections from P.1.

“There seems to be an increasing body of evidence that suggests that most of the cases associated with the second wave are indeed sort of reinfections,” Dr. Faria said.

Dr. Faria and other researchers are now looking across Brazil to observe P.1’s spread. Dr. Ester Sabino, an infectious disease expert at the University of São Paulo School of Medicine, said that one of the new outbreaks arose in Araraquara, a Brazilian city of 223,000 people that did not have high rates of Covid-19 before P.1 arrived.

If people in Araraquara did not have high levels of antibodies before P.1’s arrivals, she said, that suggests that the variant may be able to spread in places without Manaus’s extreme history. “This might happen in any other place,” she said.

Michael Worobey, a virologist at the University of Arizona who was not involved in the research, said it was time to pay attention to P.1 in the United States. He expected it would become more common in the United States, although it would have to compete with B.1.1.7, which may soon become the predominant variant in much of the nation.

“At the very least, it’s going to be one of the contenders,” Dr. Worobey said.

In their experiments, Dr. Faria and his colleagues also tested antibodies from eight people who received CoronaVac, a Chinese-made vaccine that has been used in Brazil. They found that the vaccine-generated antibodies were less effective at stopping the P.1 variant than other types.

Dr. Faria cautioned that these results, derived from cells in test tubes, don’t necessarily mean that vaccines will be less effective at protecting real people from P.1. Vaccines may very well provide strong protection from P.1 even if the antibodies they generate aren’t quite as potent. And even if the variant manages to infect vaccinated people, they will most likely remain shielded from a severe bout of Covid-19.

For Dr. Sabino, the ultimate importance of P.1 is the threat that concerning variants pose when they can pop up anywhere in the world.

“It’s just a matter of time and chance,” she said.