How to Unite a Deeply Divided Kosovo? Name a Lake... 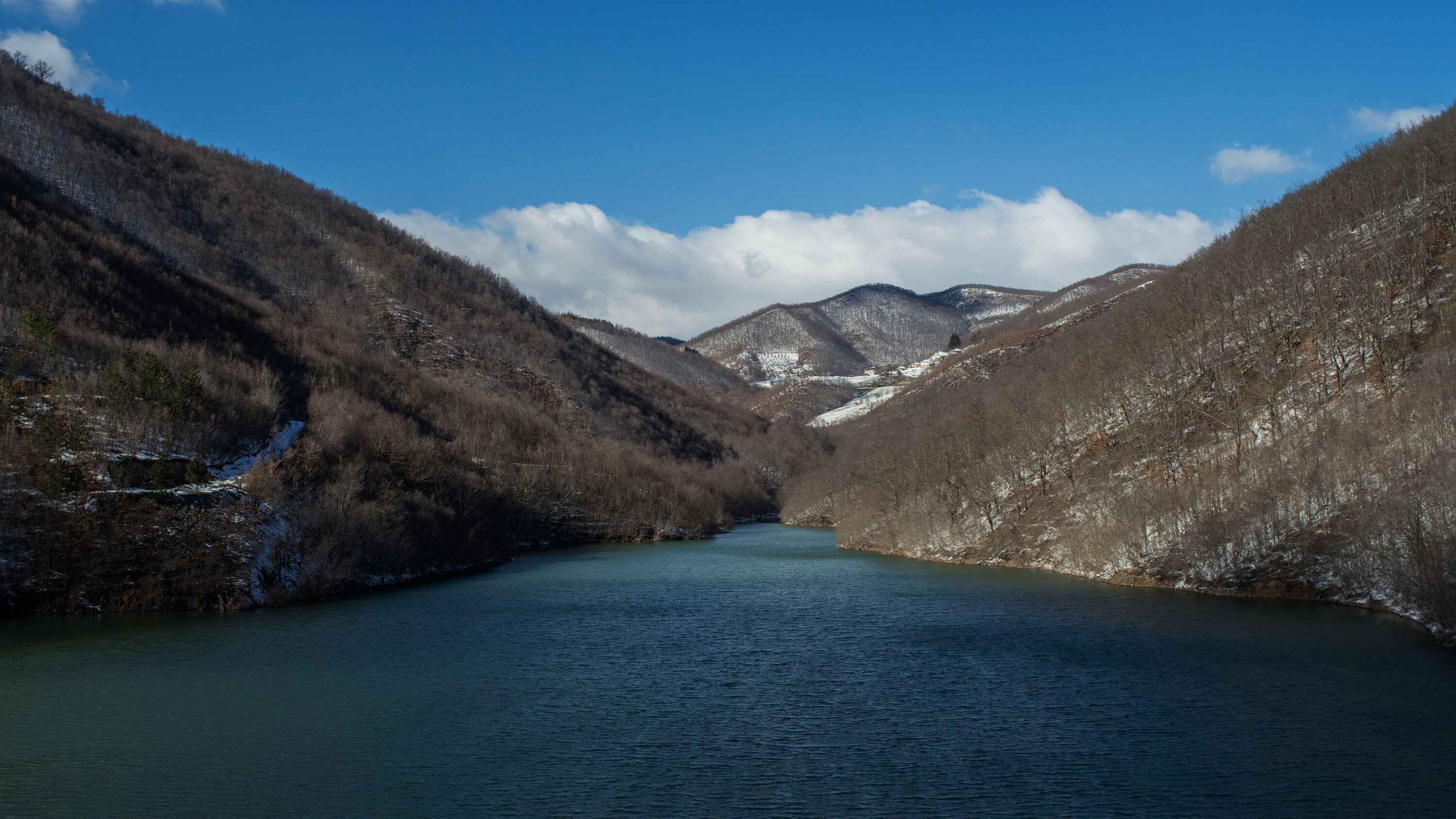 ZUBIN POTOK, Kosovo — Ljiljana Trifonovic, an ethnic Serb living in a waterside hamlet in northern Kosovo, never cared for American politicians — “they are all against us,” she said — but she took a shine to Donald J. Trump when he was in the White House.

“He is a bit crazy like we are and has the same hair color I do,” Ms. Trifonovic, 58, said, patting her orangey-blond mane.

All the same, it came as a rude surprise late last year when a huge banner suddenly appeared next to the reservoir outside her home declaring the water “Trump Lake.” Another big banner went up at the same time on a bridge down the road announcing that it would now be called “Trump Bridge.”

“We already have our own name for the lake. Why Trump?” Ms. Trifonovic asked, mystified and also annoyed by the abrupt renaming of the first thing she sees every morning when she looks out her window.

But things aren’t that simple. The artificial lake, created in the early 1970s by a big hydroelectric project when Kosovo was still part of Yugoslavia, has not one but two names: one used by Serbians — Gazivoda — and another — Ujman — used by the ethnic Albanians who now dominate Kosovo, which declared independence from Serbia in 2008.

Most things in Kosovo have two names and that is not usually a big deal. The two communities, which rarely mix and harbor deep suspicions of each other, just use whichever they want.

But what to call the nearly five-square-mile reservoir, which extends into Serbia but lies mostly in Kosovo, became an issue late last year when officials from the two countries became entangled in an unorthodox diplomatic push by the Trump administration to heal the poisonous rift between the two communities.

The effort, led by Mr. Trump’s ambassador in Berlin, Richard Grenell, sidelined the State Department and also the European Union, both of which had been working for years, with little success, to get Serbia to accept the existence of Kosovo as an independent state. Divided by ethnicity, language and history, Kosovo’s majority Albanian population and its Serb minority disagree on just about everything, particularly the status of the land they share.

Hoping that mutual economic interests might help break down intractable political barriers, Mr. Grenell, whom the White House named as a special emissary entrusted with trying to negotiate a Kosovo settlement, proposed sending experts from the Department of Energy to look into upgrading the aged hydroelectric plant at the reservoir, which would potentially benefit both sides.

“What to call the lake that is in Kosovo and Serbia has been a serious sticking point,” Mr. Grenell posted on Twitter in September as he struggled to broker a deal that he hoped would add a diplomatic feather to Mr. Trump’s cap in the weeks before the November election.

In what started as a joke, Mr. Grenell suggested that calling it “Trump Lake” might help. But the joke then became serious. Kosovo’s prime minister at the time, Avdullah Hoti, sent a tweet that he “welcomed Amb. Grenell’s proposal that Lake Ujman be renamed Trump Lake.”

Officials in the Serbian capital Belgrade, eager to please Mr. Trump, whom they considered more sympathetic to their side than previous American presidents, also welcomed the idea.

Then, to just about everyone’s dismay, the banners appeared.

Kosovo, perhaps the world’s most pro-American country, already has a Bill Clinton Boulevard and a statue of the former Democratic president, who presided over a NATO bombing campaign against Serbia in the late 1990s, as well as a Hillary Boutique and a highway named after President Biden’s late son, Beau, an army officer who helped train Kosovo judges after the 1988-89 war.

So honoring Mr. Trump, it would have been reasonable to assume, would not ruffle too many feathers.

Ethnic Albanians are so grateful to the United States for saving them from Serbian rampages in the 1990s that “nearly anything proposed by America will be accepted, no matter how stupid,” said Valdete Idrizi, a member of the Kosovo Parliament from the northern city of Mitrovica. “Without the U.S. we would not have a Kosovo state.”

But Mr. Grenell’s suggested name change for the artificial lake proved a bridge too far for even the most ardent pro-Americans, who never really liked the idea of “Trump Lake” and have become outspokenly hostile to it now that they no longer need to worry about making nice with the former president.

“We are not going to change the name, obviously. The lake has a name,” Vjosa Osmani, Kosovo’s American-educated acting president and an expert in international law, said last week in an interview in Pristina, the Kosovo capital. “It was very awkward to hear people joke about it. This is a matter of sovereignty.”

The proposed name change, however, has achieved a singularly elusive goal in this part of the world: It has united ethnic Albanians and Serbs in Kosovo. Almost everybody thinks the idea ludicrous.

“The lake has a name and it is not and never will be Trump,” said Ms. Trifonovic’s 31-year-old son, Milan. “How would you Americans feel if one of your lakes suddenly became Milosevic Lake?” he asked, referring to Serbia’s former autocratic leader Slobodan Milosevic. “This whole thing is insane.”

Who put up the professionally printed canvas banners, which vanished after a few days, is a mystery.

Ethnic Albanian leaders denied any responsibility, as did President Aleksandar Vucic of Serbia, who claimed in September that they were a local initiative by ethnic Serbs living near the lake because “Kosovo Serbs love the president of the United States Donald Trump.”

This came as a surprise to local Serbs, including the mayor of Zubin Potok, a gloomy Kosovo Serb town near the lake. The mayor, who declined to be interviewed, told a local journalist that he knew nothing about the banners renaming the lake and bridge until she called him.

At a smokey cafe in the town’s cultural center last week, customers giggled and choked on their espressos when asked about Trump Lake. The barkeeper, who gave only his first name, Peter, said a better name would be “Melania Lake” because, as a native of Slovenia, another former Yugoslav territory, the former first lady is at least a Slav and, unlike Mr. Trump, probably knows where Kosovo is.

Dejan Nedeljkovic, a political activist in the area who, unlike many Serbs in Kosovo, is highly critical of the Belgrade leadership, said he first learned about the banners from watching TV and is certain that Mr. Vucic, Serbia’s increasingly authoritarian president, had them put up “because he wanted to show off that he is a friend of Trump and to flatter him as a master of diplomacy.”

“It is total idiocy that they came up this idea,” Mr. Nedeljkovic added.

But Mr. Trump, delighted to be hailed as a peacemaker, reveled in the idea that he alone had been able to calm the Balkans, telling a campaign rally in Nebraska just days before the U.S. election that “they’ve been fighting for 400 years” but, thanks to his efforts, are now “hugging and kissing.”

Serbia keeps a tight grip on ethnic kin living in Kosovo, where Serbian enclaves, particularly in the north, rarely acknowledge the government in Pristina and instead take instructions from Belgrade, which controls a separate health service, school system and media apparatus for Serbs living in Kosovo.

Bucking Belgrade’s line can be perilous. Oliver Ivanovic, a independent-minded Kosovo Serb politician in Mitrovica, less than an hour’s drive from the reservoir, was assassinated in 2018 by unknown gunmen. Rada Trajkovic, a hospital worker and politician in a Serb enclave near Pristina who has been critical of Belgrade’s heavy hand, went into hiding recently, fearing for her safety. She said dissenting Serbs face “horrible pressure.”

Mr. Trifonovic, whose house, now deep in snow, overlooks the reservoir, showed off pictures of himself playing with friends in the lake in summer, when the water, shimmering in the sun, takes on the hues of the Mediterranean.

Told that Serbia’s president seemed to like the “Trump Lake” idea, he quickly dropped his previous hostility to the name change. “He is the president. If he wants to call it Trump Lake, then we will call it that,” Mr. Trifonovic said. “But in my heart it will stay as it always was.”