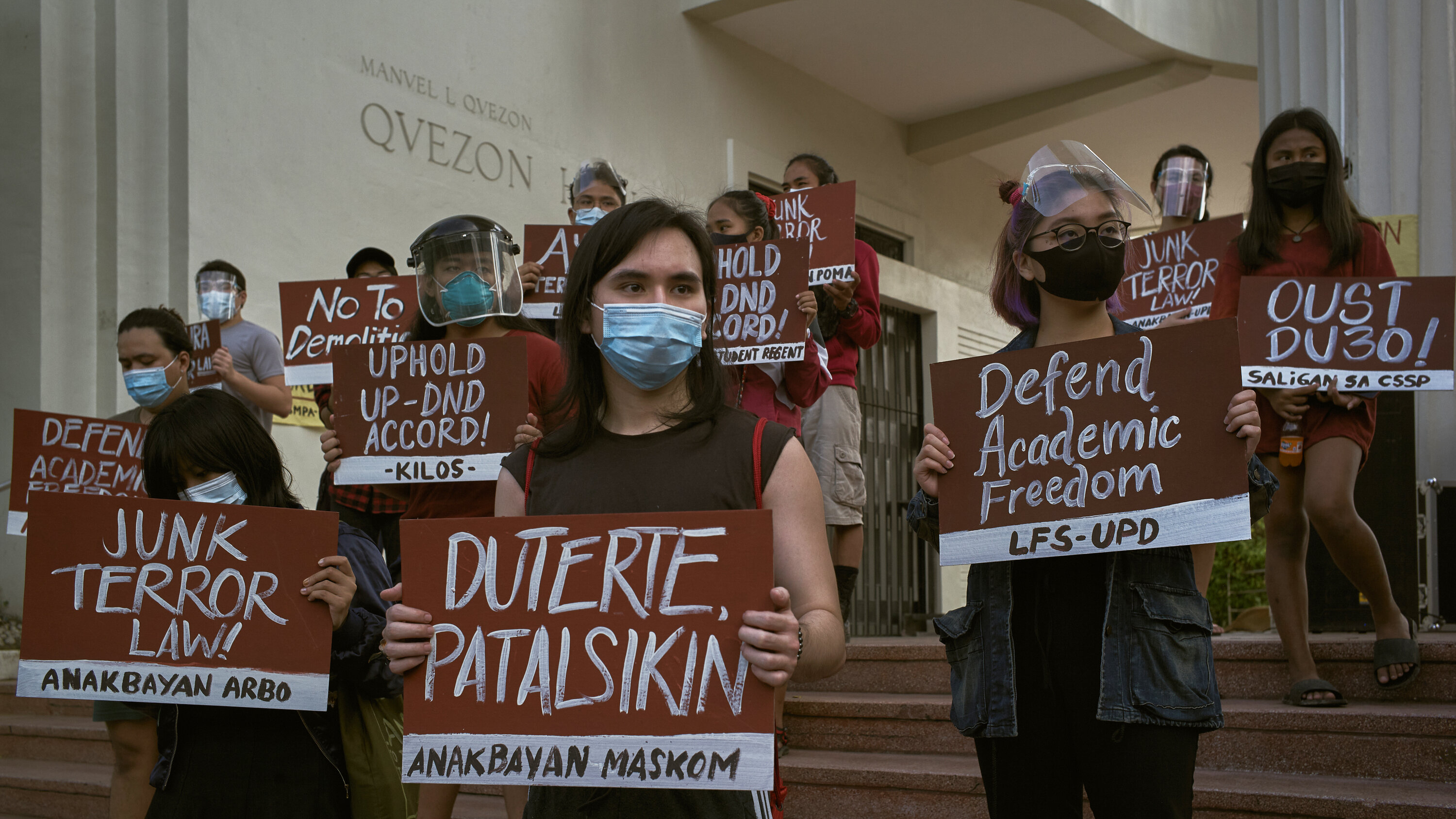 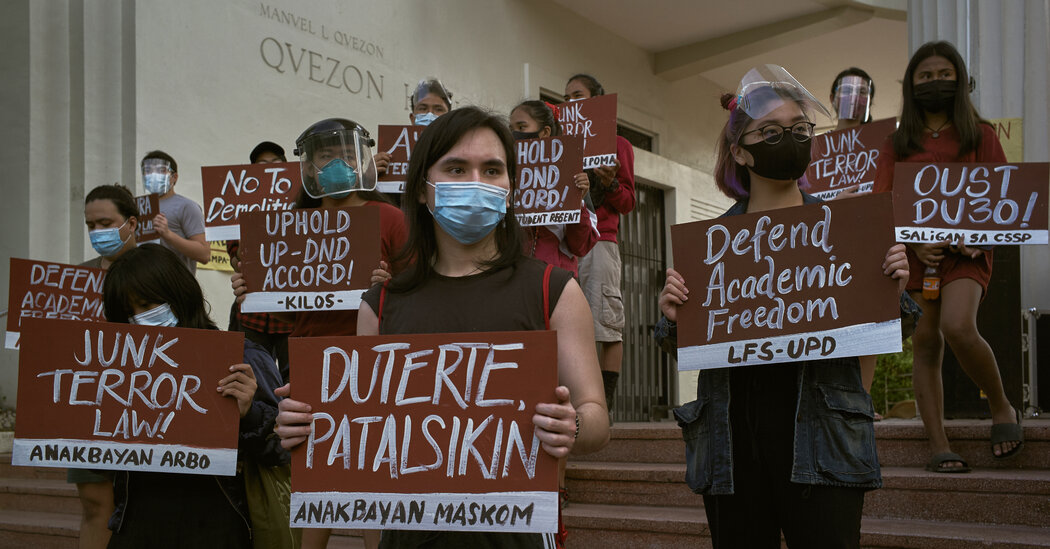 MANILA — The posters that appeared on campus were chilling. They warned that the University of the Philippines had become a breeding ground for communist sympathizers and that students and professors needed to be on high alert for antigovernment insurgents. Some students were even named as possible offenders.

No one knew where the posters had come from, but they were found on many of the university’s various campuses across the country over the past few weeks, according to students and university activists. Late last month, the government decided to get involved.

To weed out possible communists at the elite institution, Defense Secretary Delfin Lorenzana announced a decision to end a 32-year agreement that barred security forces from entering the campus and arresting individuals without first coordinating with university officials. Professors and students can now be held on mere suspicion.

About 200 students gathered at the university in Manila’s northern suburb of Quezon City to protest the announcement. By allowing security forces back on campus, they said, the government had targeted one of the few places in the Philippines where criticism of President Rodrigo Duterte was still tolerated. For them, the purpose of the new rule was clear: another crackdown on political freedom in a country where dissidents are often tagged and dispatched at a moment’s notice.

“This is the people’s fight,” said Angelo Marfil, one of the students camped out in front of the building, Quezon Hall, for the protest. “An attack on academic institutions is an attack on all of us because they are trying to scare us,” he said.

Mr. Marfil, a 19-year-old political science major, sat cross-legged on the floor with a cup of coffee in his hands as he pointed to a new art installation being built by students at the university. The installation — made up of bamboo, old furniture and desks — was designed to look like a barricade and to commemorate a 1971 student uprising at the school.

“That is symbolic of our protest,” he said. “The government of President Duterte has openly declared war against us.”

Like other students at the protest, a smattering of whom sported colorful hair and Indigenous clothing, Mr. Marfil has joined many antigovernment demonstrations in what he called the “parliament of the streets,” rallying against government corruption and in support of the International Criminal Court’s investigation into Mr. Duterte for the mass murder of people suspected of being drug dealers and addicts, which the court has called “crimes against humanity.”

The youngest of four brothers, he said that his siblings had counseled him to tone down his rhetoric but that he had decided to ignore their advice.

Cristina Chi, another student at the sit-in protest, agreed that it was no time to remain silent and described the decision to overturn the accord as an act of intimidation. Ms. Chi, a 21-year-old communications major with plans to become a journalist, said she remembered listening to radio broadcasts of rallies and protests as a child and wishing she could join in. After studying at the university for two years, she has become even more passionate about the need for change.

The word “revolution” has become a part of her daily discourse, she said, but that did not mean she should be branded as a violent insurgent.

“If any of the military hears of this and accuses me, my professor, or my classmates of harboring communist ideas, the absence of an accord will allow them to drag me out of class and arrest me on trumped-up charges,” Ms. Chi said, adding that activists in progressive groups had already been targeted and that she feared such roundups would become the norm on campus.

“It’s also insulting that they think we need protection from being brainwashed by communists, as if someone can just decide to join the armed struggle overnight,” she said. “I think it’s dangerous and just factually incorrect to say that the university needs to force revolutionary ideas down students’ throats. If anything, it’s being exposed to the poor conditions of state education that open our eyes to become more radical, more critical.”

The University of the Philippines has long been an oasis of free speech, producing some of the country’s top minds. Its sprawling, verdant grounds, lined with huge acacia trees, have witnessed important moments in modern Filipino history, including the student protests that helped topple the dictator Ferdinand Marcos in 1986. Mr. Marcos was himself a graduate of the school.

In 1989, three years after a popular revolt ended Mr. Marcos’s brutal regime, the government agreed to keep security forces off the campus. The decision was made after a university employee, Donato Continente, was arrested at the school on suspicion of murdering Col. James N. Rowe of the U.S. Army, who was a military adviser to the Philippine armed forces. Mr. Continente was eventually convicted, but he maintained his innocence and claimed he had been tortured into making a confession. He was freed in 2005 after 14 years in prison.

At least 18 other universities, including four private institutions considered to be among the best schools in Manila, have been labeled by the military in recent weeks “recruitment havens” for communists. The Philippines is one of the few places in the world that has an active communist insurgency.

The military also recently published a list of 27 former students at the University of the Philippines who it claimed had become members of the New People’s Army, an insurgent group that aims to topple the government through armed conflict. The list, which included the names of prominent journalists and a former government official, was published on a government social media account before being taken down, forcing Mr. Lorenzana, the defense secretary, to issue an apology and fire an intelligence official.

Fidel Nemenzo, chancellor at the university’s main campus in Quezon City, did not want to speculate about why the government had suddenly canceled the agreement keeping security forces off campus after it had served both the authorities and the university so well for three decades. But he did note that the move came a year after Mr. Duterte signed an antiterrorism law that activists have said was designed to stifle political dissent.

That law, which gave the military the power to detain suspects without a warrant for nearly a month, was signed by Mr. Duterte amid large street protests organized by groups affiliated with the university.

“Part of this campaign is the ‘red tagging’ of institutions and individuals critical of the government,” Mr. Nemenzo said. “Academic freedom — the freedom to think and speak out — requires the absence of fear,” he added. “How can one speak out freely if the military can enter the university unannounced?”

As Mr. Nemenzo sat in his office, the Duterte Youth, a right-wing group represented in Congress, attempted to hold its own rally on campus, a day before the planned sit-in. Mr. Nemenzo encouraged them to disperse. There had been reports of uniformed men in military vehicles on campus, he said.

After the group’s members held a short program expressing their support for Mr. Duterte and Mr. Lorenzana, they quietly left.