A Global Tour of a Record-Hot Year 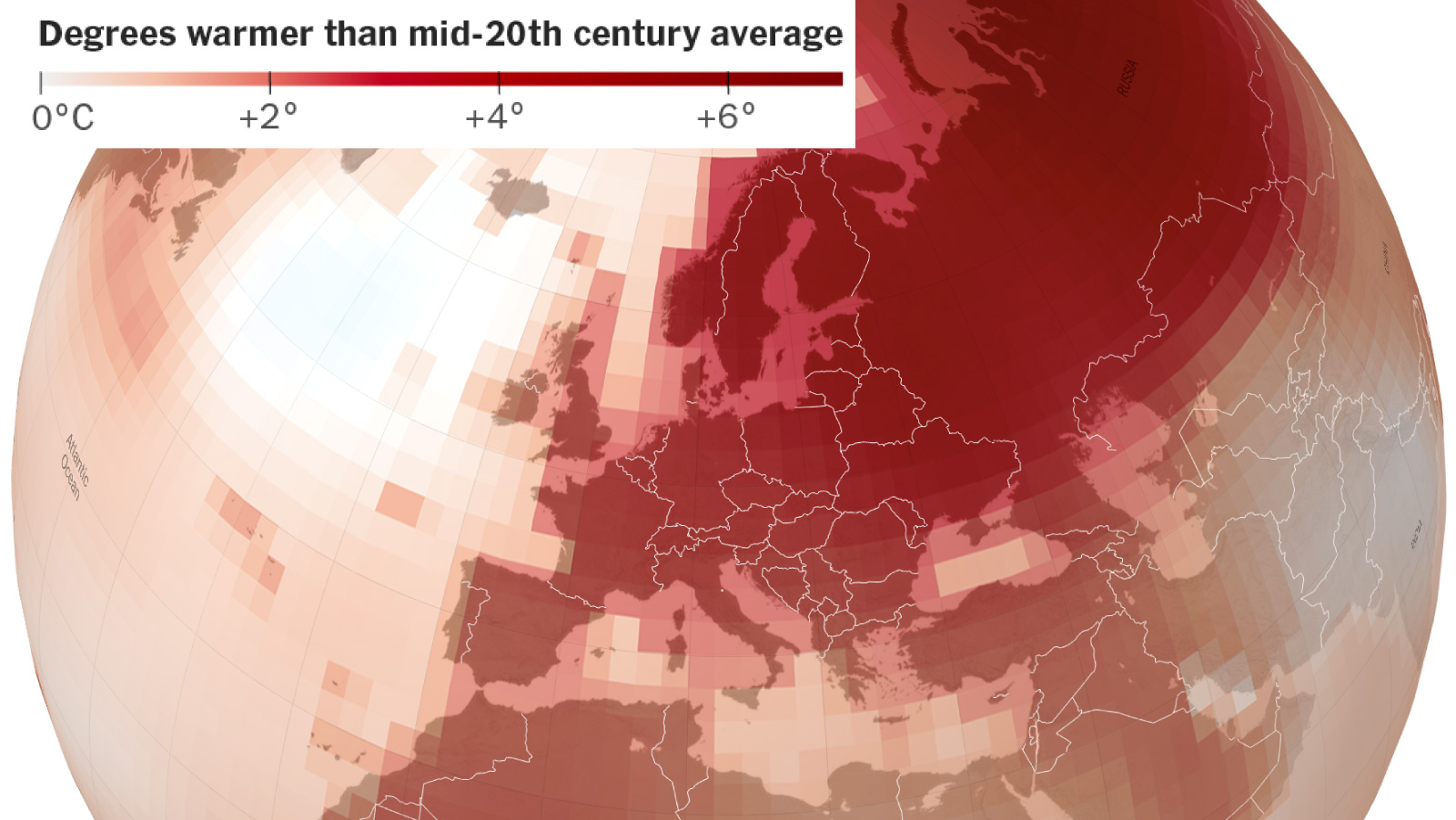 2020 was effectively tied with 2016 for the hottest year on record, as global warming linked to greenhouse gas emissions showed no signs of letting up.

Siberia and the Arctic were among the hottest regions. The heat fueled wildfires that pumped even more carbon dioxide into the atmosphere.

Temperatures in the Siberian town of Verkhoyansk reached a record 100 degrees Fahrenheit in June, more than 30 degrees above average.

The heat was also felt in Europe, which had its warmest year ever and experienced blistering heat waves as late as September.

Surface cooling of the tropical Pacific Ocean, which started during the second half of the year, did little to offset the heat elsewhere.

In central South America, warming and drought resulted in wildfires burning a quarter of the vast Pantanal wetland.

In the United States, the warming was most significant in the Northeast and Southwest. Drought spread to half of the country.

This analysis of global temperatures, by the NASA Goddard Institute for Space Studies and released Thursday, found that 2020 was slightly warmer than 2016. But the difference was insignificant, the institute’s director, Gavin Schmidt, said in an interview.

Other analyses issued Thursday, one by the National Oceanic and Atmospheric Administration and another by Berkeley Earth, an independent research group in California, found that 2020 was slightly cooler than 2016, as did one published last week by the Copernicus Climate Change Service in Europe. But the difference was small enough to not be statistically significant.

With the 2020 results, the last seven years have been the warmest since the beginning of modern record-keeping nearly a century and a half ago, Dr. Schmidt said.

“We are now very, very clear about the underlying long-term trends,” he said. “We understand where they come from. It’s because of the greenhouse gases being pumped into the atmosphere.”

The planet has warmed more than 1 degree Celsius (about 2 degrees Fahrenheit) since the late 1800s, when the spread of industrialization led to rising emissions of carbon dioxide and other greenhouse gases, and the pace has accelerated in recent decades. Since 1980, warming has averaged about 0.18 degree Celsius (about 0.32 degrees Fahrenheit) per decade.

But the numbers are only a small part of the story. As climate scientists have predicted, the world is seeing an increase in heat waves, storms and other extreme weather as the planet warms, and in disasters like droughts, floods and wildfires that result. Last year offered no respite, with record fires in Australia and California, and severe drought in central South America and the American Southwest.

Some climate forecasters had thought that the arrival of cooler sea-surface temperatures in the Pacific Ocean — part of the recurring global climate phenomenon called La Niña — would tamp down temperatures this year. It is difficult to quantify the influence of La Niña, but it is clear that any effect was eclipsed by the emissions-related rise in temperatures.

La Niña only emerged in September, and is expected to continue at least through winter. The climate impact of La Niña tends to peak several months after the Pacific waters reach their coolest point, so it may have more of a cooling effect in 2021.

When La Niña is factored in, “you’re expecting not a record warm year” in 2021, Dr. Schmidt said. “But another top-five year, and clearly part of the string of very warm years that we’ve been having,” he added.

Dr. Schmidt said his team and others have been studying the effects of the coronavirus pandemic on 2020 temperatures. Lockdown orders and the economic slowdown reduced greenhouse gas emissions by about 10 percent in the United States alone, according to a recent report.

Such a reduction does not have an immediate effect on temperatures, Dr. Schmidt said, and emissions presumably will rise again as the pandemic fades and the world economy returns to normal.

Of greater short-term effect, he said, may be the reduction in some transportation-related pollution, notably tailpipe emissions of nitrogen oxides, as driving has declined during the pandemic.

Nitrogen oxides form aerosols in the atmosphere that reflect some of the sun’s rays, which otherwise would strike the surface and be re-emitted as heat. Even a slight reduction in these aerosols would allow more sunlight to reach the surface, generating more heat to be trapped in the atmosphere by greenhouse gases.

Dr. Schmidt said efforts were underway to quantify the effect over the past year. “The numbers aren’t large,” he said, but they may have played a role in making 2020 a record-tying year.

“The warming associated with reduction in aerosols may be a part of the story,” he said.