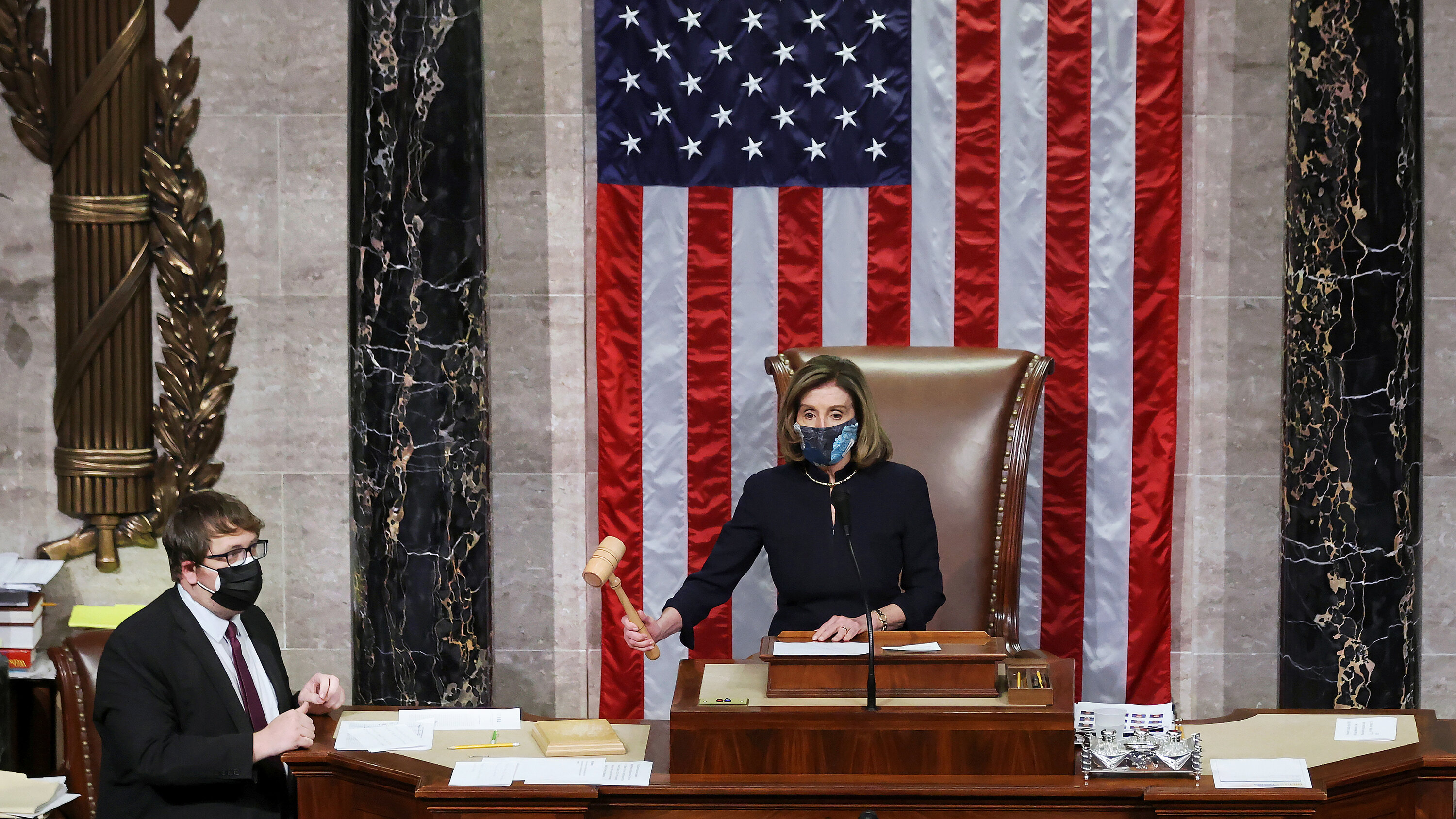 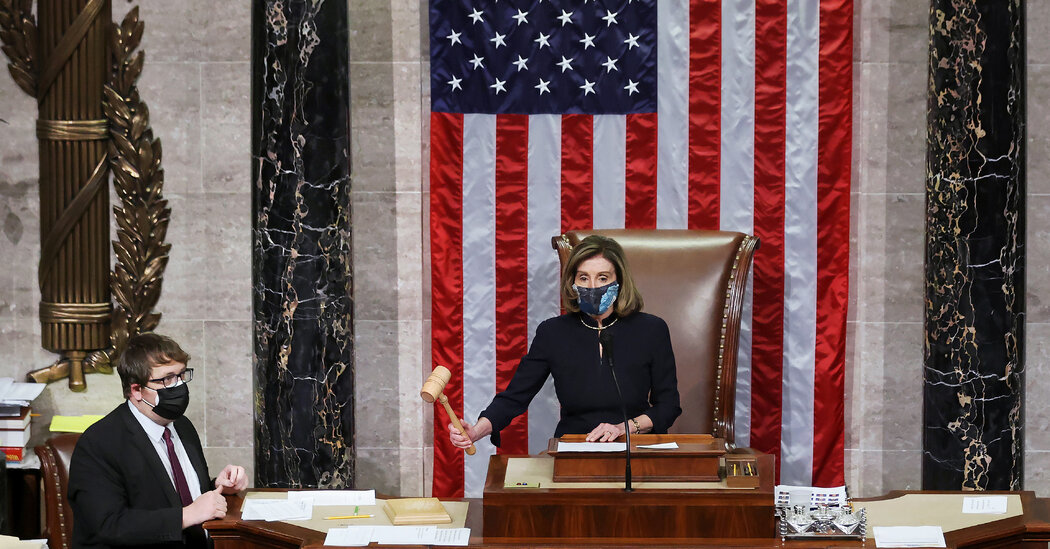 Trump is impeached for a second time

Donald Trump last night became the first U.S. president to be impeached twice, as the House voted 232 to 197 to charge him with inciting insurrection over the breach of the Capitol last week by his loyalists, in which five people, including a police officer, died.

Ten Republicans joined Democrats in voting for impeachment. During the debate, a few allies defended Mr. Trump, but most in his party simply argued that a rush to impeach raised constitutional questions. You can read comments from lawmakers here.

Presidential address: As Congress debated his role in last week’s attack, Mr. Trump issued a statement amid warnings of a nationwide wave of violence surrounding Joe Biden’s inauguration next week: “In light of reports of more demonstrations, I urge that there must be NO violence, NO lawbreaking and NO vandalism of any kind.”

Across the Atlantic: The riot at the Capitol and Republicans’ bogus claims of election fraud have led populist former allies of Mr. Trump, such as the French far-right politician Marine Le Pen and President Andrzej Duda of Poland, to distance themselves from him.

What’s next: No president has ever been impeached twice or in his last days in office, and none have ever been convicted. Our reporters outline the next steps in the process.

China, facing its worst coronavirus outbreaks since last summer, placed more than 22 million people under lockdown, double the number affected last January in Wuhan and testing the government’s ability to beat back the infections.

At an average of 109 new cases a day over the past week, the flare-ups are small compared with the devastation in other countries, but they threaten to undercut the success China has had in subduing the virus and restarting the economy. The lockdown includes the cities of Shijiazhuang, Xingtai and Langfang and districts within Beijing.

Related: In another possible setback for China, scientists in Brazil have downgraded the efficacy of its CoronaVac vaccine to just over 50 percent — far below the 78 percent level announced last week. The implications could impair China’s push to provide its vaccine to the developing world.

Here are the latest updates and maps of the pandemic.

Aleksei Navalny will return to Russia

Despite the threat of being jailed upon arrival, the Russian opposition leader Aleksei Navalny said yesterday that he would fly to Moscow this weekend, after spending months recovering in Germany from a nerve-agent attack believed to have been carried out by the Russian state.

Mr. Navalny was poisoned in Siberia in August in what he and Western officials say was an assassination attempt by the Russian government. He fell into a coma and was flown to Berlin for treatment.

The announcement of his return came two days after Russia’s prison authority petitioned a court to imprison Mr. Navalny for what it said was violating the terms of an earlier suspended prison sentence.

Remarks: “They are doing everything they can to scare me,” Mr. Navalny said of the Russian authorities in an Instagram post. “But I don’t much care about what they are doing. Russia is my country, Moscow is my city, and I miss them.”

Analysis: “The Kremlin has gone so far in its game of raising the stakes, sharply increasing expectations that Navalny will be arrested, that not arresting him will be seen by conservatives and security officials as a show of weakness,” Tatiana Stanovaya, of the Carnegie Moscow Center, said. “They expected that he would not return.”

If you have 8 minutes, this is worth it

In the years after the Korean War, refugees like Han Gi-taek, above, arrived in Haean, a town on the border with North Korea, to build a new life. Stray land mines and the brutal cold made the land hard to cultivate, so the government promised the settlers that they would be allowed to keep the land if they worked it for 10 years.

Now, after a long holdup over thorny legal issues, South Korea is making good on its promise to 160 families. Our correspondent looked at their battle to make the town home.

Here’s what else is happening

Massacre in Ethiopia: At least 80 people were killed on Tuesday when unidentified gunmen stormed through a village in the Benishangul-Gumuz region, along the border with Sudan, in the latest of a series of ethnically driven massacres in the area.

Italy: The country started its largest mob trial in decades, with prosecutors in the southern region of Calabria accusing 325 defendants of murder, corruption, drug trafficking and other crimes. Separately, Italy’s government is in crisis, raising concerns that a political breakdown might hamper the virus response.

Estonian politics: Prime Minister Juri Ratas resigned yesterday, after his coalition government of centrists and far-right populists was engulfed by a corruption scandal over state loans intended for pandemic relief.

“Knife edge”: For some Scottish seafood businesses, which face daunting paperwork that could cause shipment-ruining border delays, Brexit could be a death knell.

Snapshot: Above, scores of armed National Guard troops lined the halls of the U.S. Capitol as legislators gathered for the impeachment vote, some snoozing beside their rifles. More than 20,000 troops are expected to arrive in Washington ahead of President-elect Joe Biden’s inauguration.

Pig portrait: A cave painting believed to date back at least 45,500 years may be the oldest figurative art by humans ever found. The image resembles the warty pig, a species still living on the Indonesian island of Sulawesi, where the painting was discovered.

Lives lived: Adolfo Quiñones, who grew up in public housing in Chicago and went on to become a pioneer of street dance in the 1980s, has died at 65. Better known as Shabba-Doo, Mr. Quiñones called street dance an “art form, on the same level as jazz or ballet.”

What we’re reading: This spellbinding, and very sad, Wired article about the monthslong hunt to identify a mysterious hiker who died in Florida, where his emaciated body was discovered in a tent.

Now, a break from the news

There’s a whole world at your fingertips: At Home has our full collection of ideas on what to read, cook, watch and do while staying safe at home.

And now for the Back Story on …

Supporting the arts during the pandemic

A host of countries are taking steps to help artists and cultural venues stay afloat during the pandemic, some more generously than others. Here’s a look at the highlights, and missteps, from eight countries’ efforts.

President Emmanuel Macron of France was one of the first world leaders to act to help freelance workers in the arts, removing a minimum requirement of hours worked for those who had previously qualified for a special unemployment system for performing artists. He also set up government insurance for TV and film shoots to deal with the threat of closure caused by the pandemic. Other countries, including Britain, quickly copied the move.

In June, the German government announced a $1.2 billion fund to restart cultural life, including helping venues upgrade their ventilation systems. The finance ministry intends to start funds to support organizers of smaller cultural events and to provide insurance for larger events to mitigate the risk of cancellation. Austria introduced similar event insurance in January.

Though South Africa’s coronavirus relief efforts have been dogged by allegations of corruption and mismanagement, the government has provided small payments to arts workers, including freelancers, actors and musicians, above existing unemployment benefits.

In July, the British government announced a cultural bailout package worth about $2.1 billion to save theaters, comedy clubs and music venues. In December, institutions including the National Theater and the Royal Shakespeare Company were given long-term loans under the package. Even with the help, there have already been around 4,000 layoffs at British museums alone.

That’s all from me. Thanks for starting your day with The Times.

Thank you
Theodore Kim and Jahaan Singh provided the break from the news. You can reach Natasha and the team at briefing@nytimes.com.

P.S.
• We’re listening to “The Daily.” Our latest episode is about whether a recent crackdown on U.S. social media makes violence less likely, or just harder to track.
• The word “waackin’” — one of Adolfo Quiñones’s dancing techniques — appeared for the first time in The Times yesterday, as noted by the Twitter bot @NYT_first_said.
• Here’s our Mini Crossword, and a clue: Like lettuce and kale (five letters). You can find all our puzzles here.
• David Rubin, The Times’s chief marketing officer, talked to the “Our Future” podcast about his vision for The Times being the “Netflix of Truth.”