Arizona, Roiled by Covid in Summer, Faces Even Worse Outbreak... 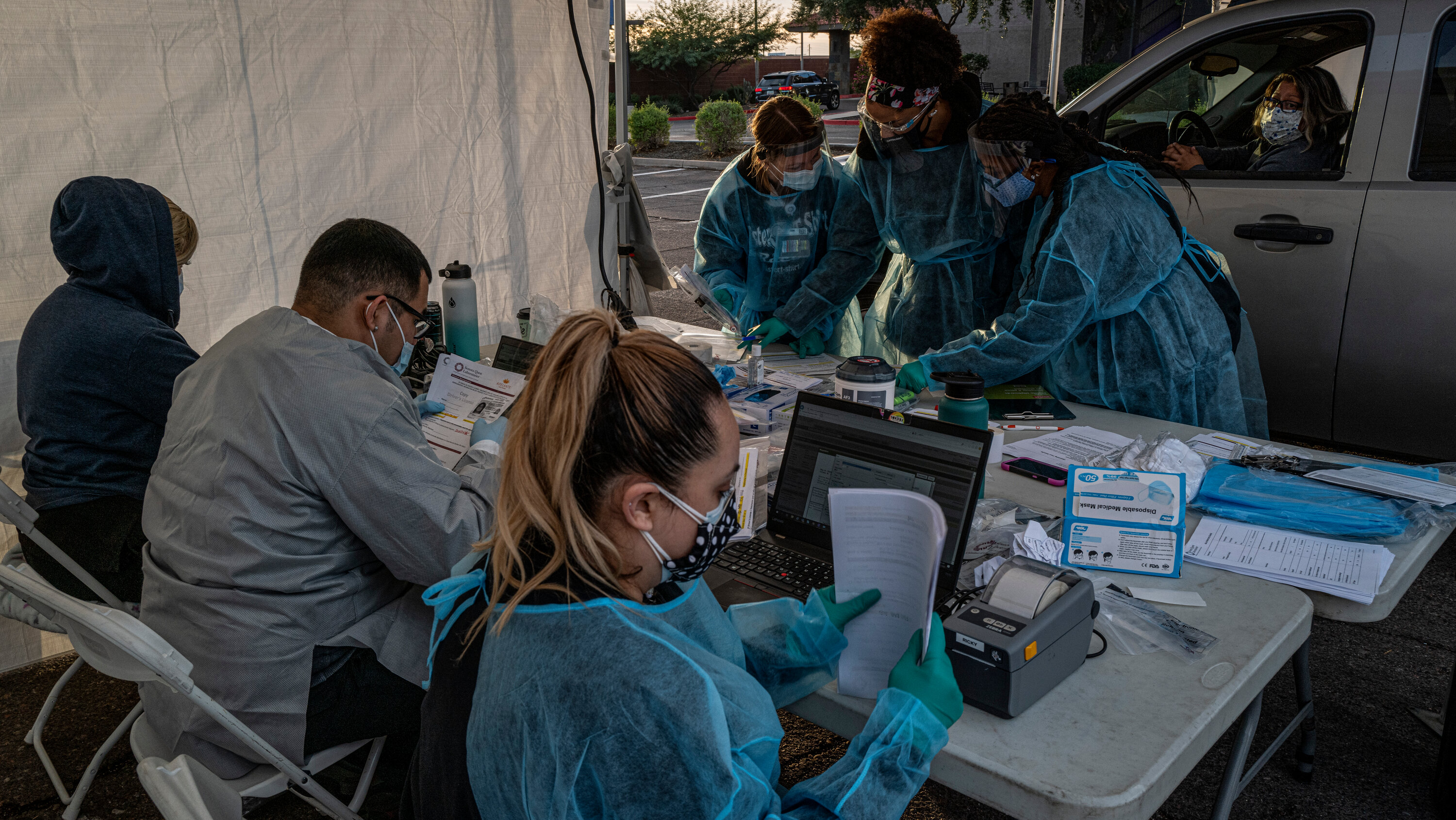 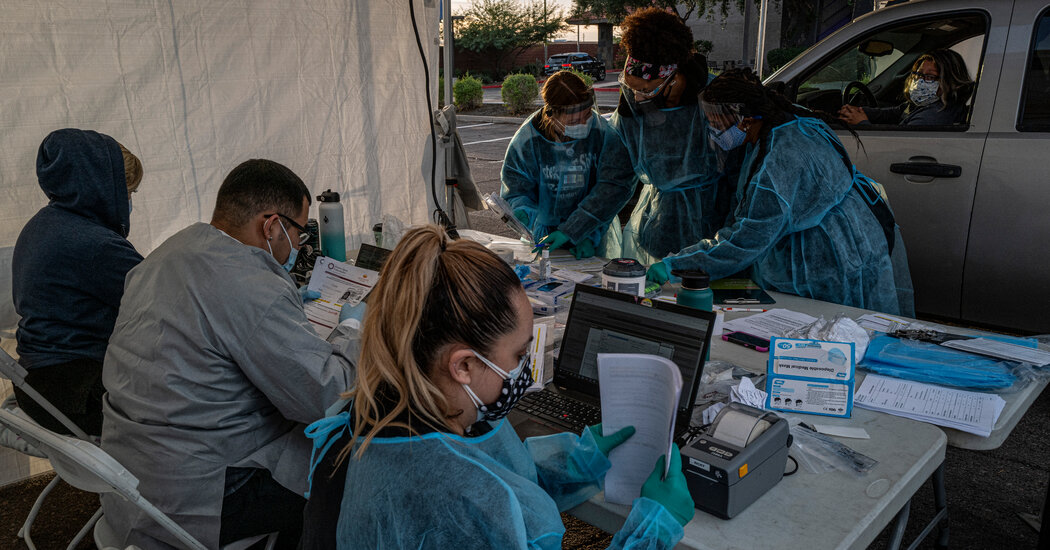 The summer surge that raged across the Sun Belt started in Arizona. For more than a month, from early June until mid July, the state added cases at the highest per capita rate in the country. Thousands died. Hospitals were stretched thin. At the peak, more than 3,800 cases were emerging each day.

As a new year begins, Arizona is again in dire shape, with a higher rate of new cases than any other state. Hospitalizations and deaths have surpassed records. Over the last week, the state has averaged more than 8,000 cases a day, more than double the summer peak.

“It shouldn’t have to have taken this amount of destruction for folks to take it seriously,” said Kristin Urquiza, who spoke of losing her father to the coronavirus at the Democratic National Convention last summer. In recent months, she said she has been in Phoenix, helping her mother but also watching the city around her be overtaken by the virus that killed her father in June. “There might be some hope that people will begin to think about it differently if they see it take hold of people they love,” she said.

Yet the cases keep pouring in, with no sign of slowing and little indication, some Arizona health care leaders say, of the kind of widespread public vigilance that might bring the outbreak under control. At the same time, vaccines in the state are being administered at among the lowest rates in the country.

“Most Americans don’t want to know, don’t want to acknowledge, don’t really want to recognize and certainly — even as it’s descending upon us — do not appear to understand the dire circumstances that we are facing,” said Dr. Marjorie Bessel, the chief clinical officer at Banner Health, the Arizona’s largest hospital network.

Arizona is by no means alone in its struggle. Nationally, it has become routine for more than 200,000 infections and more than 2,500 deaths to be announced in a single day. California, Rhode Island, Tennessee and Oklahoma are all identifying cases at extraordinarily high rates. More than 131,000 coronavirus patients were hospitalized across the country on Tuesday, a record, according to the Covid Tracking Project.

The outlook is especially alarming in Southern California. In just two weeks, more than 240,000 cases had been identified in the Los Angeles metropolitan area. That is more cases than at least 19 entire states have identified over the entire pandemic. Hospitals have become so crowded that the Los Angeles County emergency medical services agency directed ambulances not to transport patients who cannot be resuscitated by emergency responders out in the field.

The hospital system in Arizona is not at that point yet, but it is close.

Only 136 intensive care unit beds are available out of nearly 1,800 statewide, according to state data, but beds are not the most pressing issue, Dr. Bessel said. Staff and resources are. Nurses are being quickly trained in new skills and hundreds of health care workers are being flown in from other states. Still, Dr. Bessel acknowledged, there comes a point when resources can be stretched no thinner and more drastic measures, such as rationing care, might have to be considered.

“We are doing everything we can to not get to that,” she said. “Yet there are a lot of factors that I don’t have direct control of that are absolutely working against me.”

In mid-May, Gov. Doug Ducey, a Republican, lifted stay-at-home orders, making Arizona one of the first states to reopen widely after the spring Covid-19 lockdowns. While some mitigation measures remained in place, enforcement was sporadic, Mr. Humble said, and the number of cases quickly soared. When the governor put in place stricter orders, such as closing bars and gyms and allowing cities and counties to declare mask mandates, cases dropped precipitously.

Many of the stricter measures were lifted weeks later, and there seemed to be little enforcement of the rules that remained in place, Mr. Humble said. While the governor announced some measures aimed at curbing the virus in early December — and has urged people to follow recommended public health guidelines — he has consistently rebuffed appeals for more stringent restrictions, such as a statewide mask mandate, the cancellation of big sports events or a delay to the return of in-person schooling.

Mr. Ducey’s approach had already led to criticism, but he drew more attention this week, when footage emerged on social media of the governor’s son dining at a restaurant crowded with people, none of whom could be seen wearing face coverings.

“It just highlights what is possible in Arizona,” Mr. Humble said. “It’s not that his kid did it. It’s that any kid could do it.”

Messages sent to the governor’s office seeking comment were not returned.

Support for stricter restrictions is far from unanimous in Arizona, where some politicians have dismissed the pandemic as a political ploy to hurt the president or compared public health restrictions to martial law. Arizonans describe packed malls, grocery stores where few are masked and social media feeds full of pictures from crowded holiday parties. Few see additional closures and restrictions as likely — or even wanted by many people.

In April, Francisco Sirvent, a lawyer who lives in Chandler, a city southeast of Phoenix, started a Facebook group called “Reopen Arizona.” It now has almost 500 members. He takes the virus seriously, he said, and knows that it can be particularly deadly for older people. But he does not believe that lockdowns are the way to handle it, calling them “feel-good” measures that do more harm than good.

He was also doubtful that the recent spike in Arizona coronavirus numbers was something to be overly concerned about.

“I think people are going about their life a little bit more, and that’s probably why the spike happened,” he said, adding, “I’m an absolute believer that we need to develop herd immunity.”