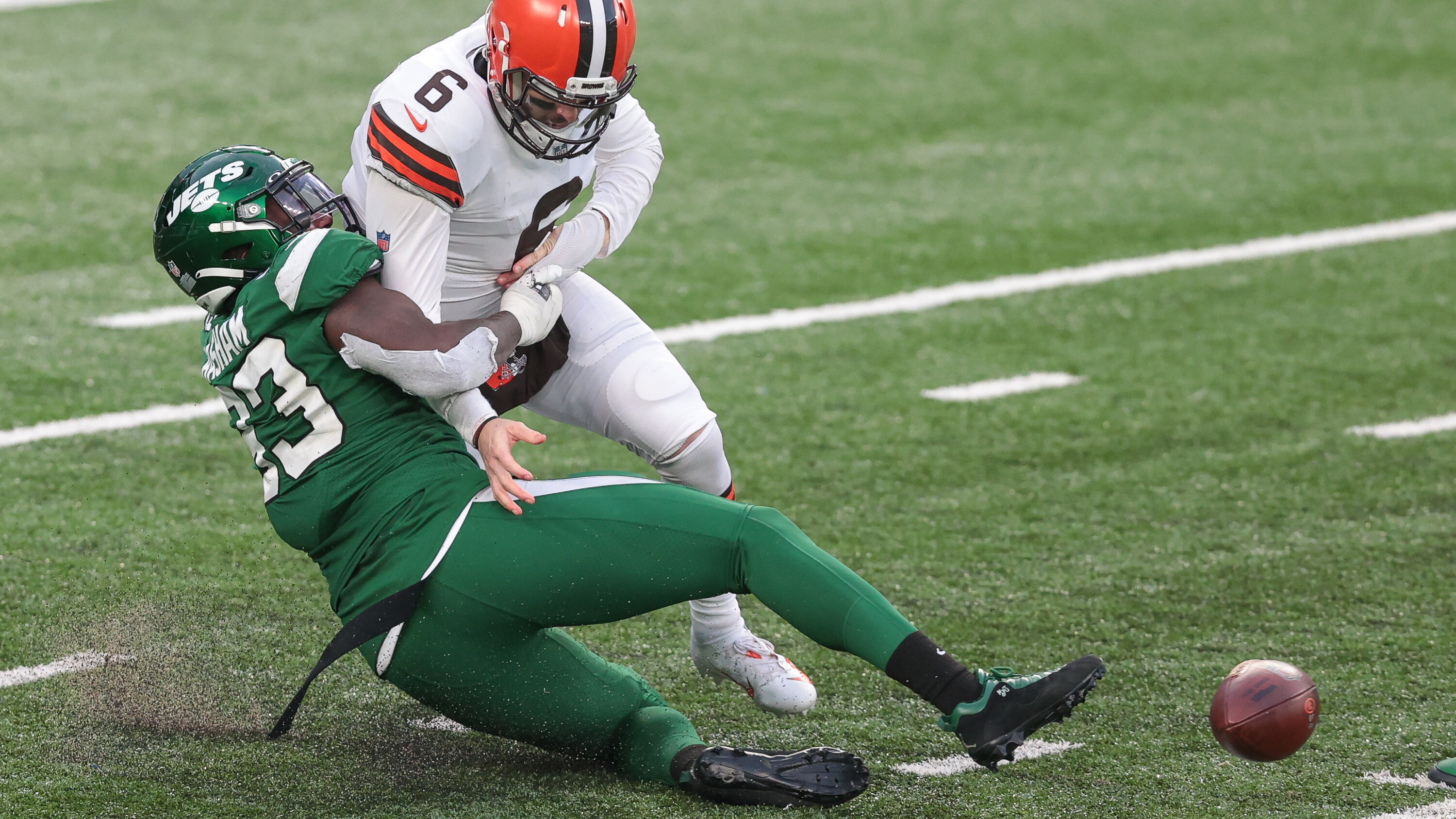 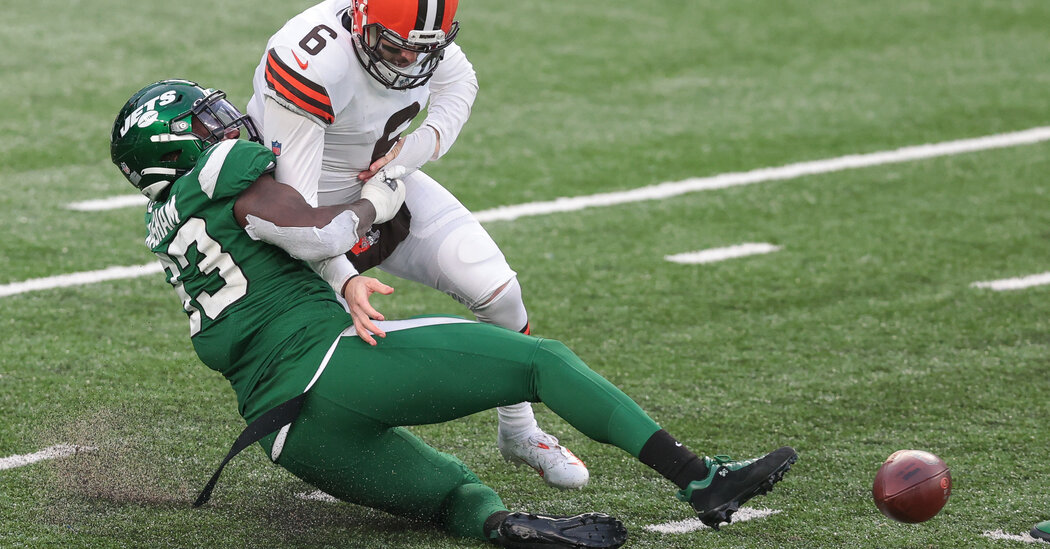 EAST RUTHERFORD, N.J. (AP) — Baker Mayfield coughed up the ball — and the Cleveland Browns’ chances to secure a playoff spot.

After a 23-16 loss to the Jets on Sunday, the Browns will need to beat the Pittsburgh Steelers next Sunday if they’re going to end the N.F.L.’s longest postseason drought.

On fourth-and-1 with one minute, 18 seconds remaining and the short-handed Browns driving for the potential tying score, Mayfield tried to push forward for the first down on a quarterback sneak but lost the ball when Tarell Basham smacked into him. Browns running back Kareem Hunt recovered, but by rule, Mayfield was the only one who could advance the ball after the fumble — and he was short of the line to gain.

The call was upheld by video review, and the Jets (2-13) won their second consecutive game after an 0-13 start to the season.

It was a rough week for the Browns (10-5), who haven’t been in the postseason since 2002 and entered Sunday’s game without seven players. That group included Jarvis Landry and three other wide receivers, and the rookie left tackle Jedrick Wills. Cleveland had to call up several players from the practice squad and Coach Kevin Stefanski ran a walk-through in a parking lot near the team’s hotel to get some of the new players up to speed on the game plan.

The Browns learned Sunday morning they would be without Wills because of an illness. He had been placed on the Covid-19 list on Thursday and activated Saturday, but was then downgraded Sunday.

The Browns’ trip to New Jersey was delayed Saturday after starting linebacker B.J. Goodson was placed on the Covid-19 list and five other players, including Landry, were ruled out because of close contact. The others were receivers Rashard Higgins, Donovan Peoples-Jones and KhaDarel Hodge, and linebacker Jacob Phillips.

Despite being short-handed, the Browns nearly erased a 20-3 deficit. But the Jets were able to hang on to the lead.

Earlier in the fourth quarter, the Browns faced third-and-6 from their 15-yard line when Basham sacked Mayfield and knocked the ball out and the Jets’ John Franklin-Myers recovered it, giving the Jets the ball at the Browns’ 17 with 3:14 left. Sam Ficken’s 34-yard field goal with 2:52 remaining gave the Jets a 23-16 lead.

Ficken sent the ensuing kickoff out of bounds, giving Cleveland the ball at its 40-yard line. The Browns got down to the 16, until the defense came up big again to end it.

The Jets clinched the second overall pick in April’s draft through the combination of their win and the Jacksonville Jaguars’ (1-14) loss to the Chicago Bears.

After Cody Parkey kicked a 44-yard field goal on Cleveland’s second offensive possession, the Jets took a 7-3 lead with some rare razzle-dazzle with 34 seconds left in the opening quarter.

Ty Johnson took the handoff from quarterback Sam Darnold and flipped the ball to Jamison Crowder, who rolled to his right and zipped a pass downfield to a wide-open Braxton Berrios — who had been lined up as the tailback — for a 43-yard touchdown.

The Jets got the ball right back when Frankie Luvu sacked Mayfield and popped the ball away — and right into the hands of Folorunso Fatukasi.

It didn’t take long for the Jets to take advantage. Darnold found Chris Herndon wide open in the back of the end zone. Ficken’s extra point was blocked by the former Jets lineman Sheldon Richardson, but the Jets were out to a stunning 13-3 lead early in the second quarter.

The Jets then made it 20-3 on Crowder’s 30-yard touchdown catch early in the third quarter.

The Jets had a chance to extend their lead later in the quarter, but Ficken’s 50-yard field goal try was blocked — again by Richardson. That drive was extended by a roughing the kicker call on Cleveland’s Jovante Moffatt, who ran into punter Braden Mann.

Mayfield then marched the Browns downfield, and Nick Chubb’s 1-yard run made it 20-10 with 2:56 left in the third quarter.

Cleveland made it back-to-back touchdown drives with Hunt running it in from 4 yards out. But Parkey hit the left upright on the extra-point attempt, and the Browns trailed 20-16 with 12:38 remaining in the fourth quarter.

In the win, Jets running back Frank Gore became the third player in N.F.L. history to rush for 16,000 yards.

Gore, 37, joined the Hall of Famers Emmitt Smith and Walter Payton, doing so with a 4-yard run in the third quarter. Gore entered the game needing 48 yards rushing to join Smith and Payton.

The Jets will close their season at New England next Sunday.