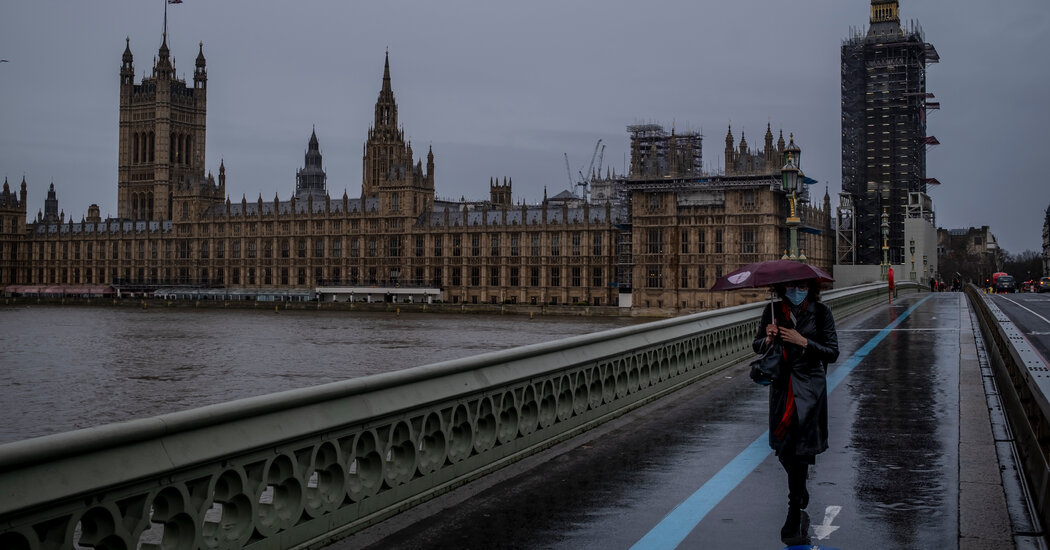 LONDON — Alarmed by what he called a faster-spreading variant of the coronavirus, Prime Minister Boris Johnson abruptly reversed course on Saturday and imposed a wholesale lockdown on London and most of England’s southeast.

The decision, which Mr. Johnson announced after an emergency meeting of his cabinet, came after the government got new evidence of a variant first detected several weeks ago in Kent, southeast of London, which the prime minister asserted was 70 percent more transmissible than previous versions.

The new measures, which take effect at the end of Saturday night, are designed, in effect, to cut off the capital and its surrounding counties from the rest of England. They are the most severe measures the government has taken since it imposed a lockdown on the country back in March, and they reflect a fear that the new variant could supercharge the transmission of the virus as winter takes hold.

“When the virus changes its method of attack, we must change our method of defense,” a somber Mr. Johnson said at a Saturday afternoon news conference. “We have to act on information as we have it, because this is now spreading very fast.”

Viral mutations are not unusual, and this variant — known as VUI 202012/01 — has been detected in a handful of other countries, but some medical experts expressed alarm about its apparent infectiousness. Some argued that it reinforced the urgency for the government to tighten social restrictions to try to eliminate the virus altogether.

Other scientists cautioned that the rapid spread of the variant did not necessarily mean that it was more transmissible.

The drastic new measures were taken after cabinet ministers were told that cases had nearly doubled in the last week in London, with the new variant accounting for 60 percent of them.

British ministers have been told that there is no evidence that the new variant is inherently more deadly, or that it is more resistant to vaccines than others, but that it is significantly easier to transmit.

That, however, raises the prospect of case numbers growing faster, leading to more hospitalizations and fatalities, and the British government said it had notified the World Health Organization about the prevalence of the new variant.

The new lockdown zone includes all of Greater London and much of the surrounding southeast of the country, a densely populated area encompassing nearly 20 million people, a third of England’s population. The restrictions will remain in place for at least two weeks, and will be reviewed on Dec. 30.

The government told people in this region to stay at home except for a few reasons, including urgent travel, medical appointments and outdoor exercise. Those outside this zone were advised not to travel into it, and those living inside will not be permitted to travel outside overnight. Nonessential shops will close, as will gyms, cinemas, hairdressers and nail salons.

And, though Mr. Johnson said just a few days ago that it would be “inhuman” to cancel Christmas, that will be the practical effect on much of the population with new restrictions on social mixing. A plan to allow three households to meet together over the holiday will be scrapped in London and the southeast, with no household mixing permitted at all.

In other parts of the country three households will be allowed to gather, but only on Christmas Day, and not for the extended five-day period once envisaged.

The announcement on Saturday is an admission that England’s existing system of restrictions, under which the country was divided into three “tiers” with different rules, has not been sufficient to control the spread of the virus. The new area of lockdown will constitute a new, and tougher, fourth tier.

Mr. Johnson already has the legal power to tighten rules and there is no current plan to recall Parliament.

The coronavirus has mutated many times since it emerged in China in 2019, according to epidemiologists. On Friday, South Africa reported it had identified a new variant, which it said was driving a new wave of infections there. It is not clear whether it is same variant as the one identified in Britain.

Most of these variants are not significant or widespread. But as the number of people who have been infected — and, presumably, have developed some immunity — increases, the pressure on the pathogen to mutate also increases. Some of the new variants can be more transmissible or lead to more severe illness than earlier versions of the virus.

“This is potentially serious,” Jeremy Farrar, an infectious disease expert who is director of the Wellcome Trust, said in a statement last week. “The surveillance and research must continue, and we must take the necessary steps to stay ahead of the virus.”

For weeks, Mr. Johnson has struggled to balance his response to the virus with pressure not to further damage the economy. The government instituted a graduated scale of tiers, placing Manchester, Liverpool and other northern cities, where the infection rates were higher, in the most restrictive tier. Life in London remained mostly unchanged.

In November, as infection rates began to climb across the country, Mr. Johnson imposed a new nationwide lockdown. That ignited speculation in British tabloids that he would be forced to “cancel Christmas.” Instead, he vowed to relax restrictions on social mixing for a five-day period around Christmas to allow families to get together.

But last week, amid signs that London had become a new hot spot, Mr. Johnson placed the capital and most of the southeast in Tier 3, the highest level of restrictions. He clung to his promise of a Christmas reprieve from Dec. 23 to Dec. 27, even as he implored people to keep family gatherings brief and small.

With the tightened restrictions announced on Saturday, the advisable Christmas became smaller still.