In Poland, Protests Over Abortion Ban Could Revolutionize Politics 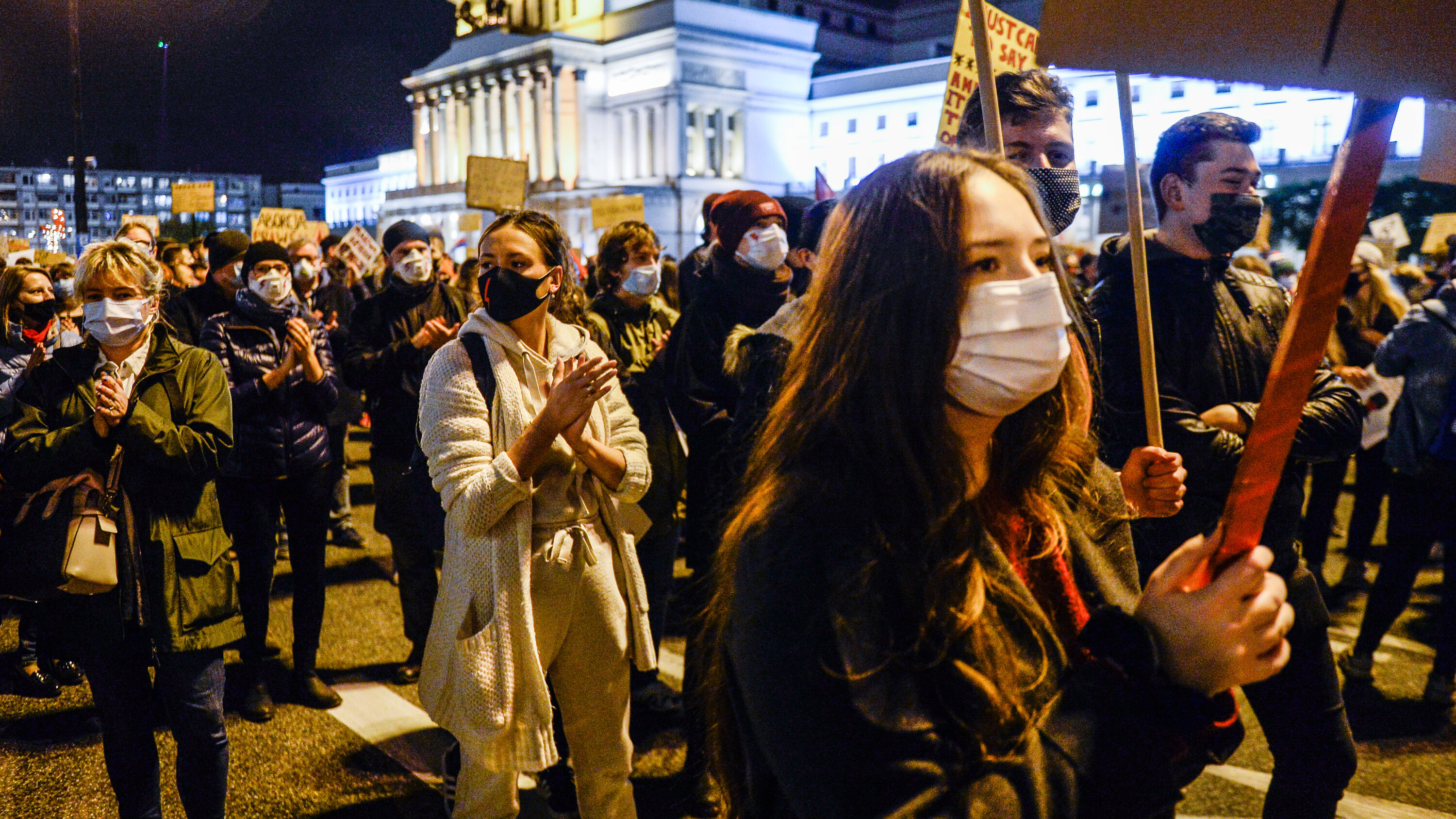 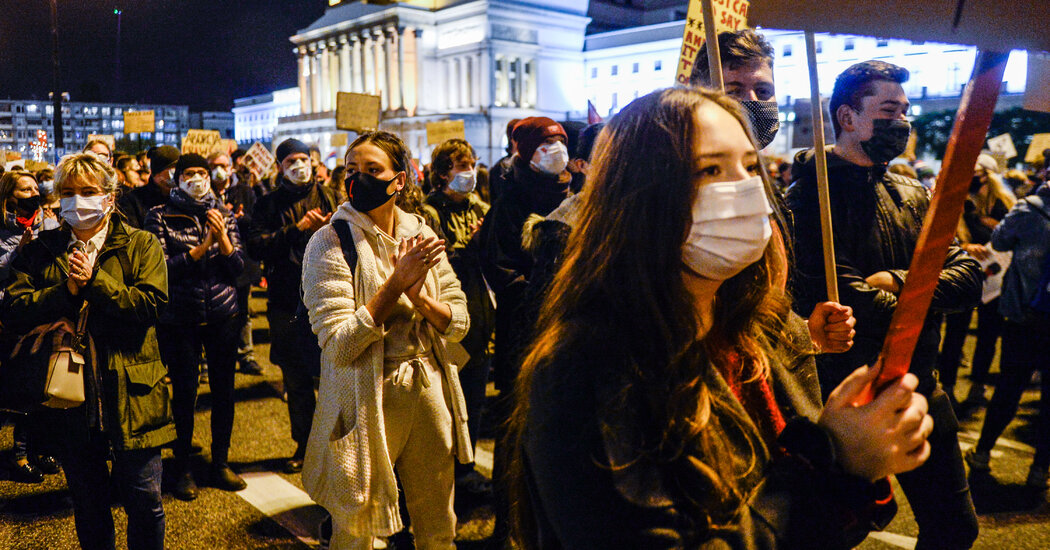 Women have been at the heart of a protest movement that has grown and battled on Poland’s streets since October, sparked by a court decision to ban most abortions. But this was never just a one-issue protest. Something deeper is going on, and it has been building for years.

Hundreds of thousands of women, teenagers and their male allies have been turning out every few days on the streets of cities and small towns across the country for weeks, braving tear gas, court orders, harsh police tactics and surging Covid infections.

Ask them why, and many will say that an uprising felt inevitable.

“There is pressure to go to every single protest, even if you are totally exhausted and you don’t have energy to work, to go to school,” said Zoe Ślusarczyk, from Warsaw, who at 15 is a member of a newly active younger generation that has flocked to the protests and shocked the government.

What is underway in Poland is a forceful renegotiation of the foundations of government power, and the back-room deals, almost exclusively among men, that built them. Women’s demands for reproductive freedom and their calls for greater equality threaten to upend a power structure that has held since the fall of Communism.

Such disruptions have been seen globally in the wake of the #MeToo movement, which has toppled many powerful men, but none have gone to the heart of politics as directly as in Poland. Gender equality would disrupt a political arrangement in the country that has been set for decades: a symbiotic relationship in which the Catholic Church lends its authority to politicians in exchange for the government’s enforcing ecclesiastical morality, including by restricting abortion.

That arrangement now seems to many like a failed bargain with an institution that has been found lacking, after revelations that the church, when it was led by Pope John Paul II before he became pontiff, had protected pedophile priests. The Polish Catholic church declined to comment for this article, but referred the Times to previous statements on the sanctity of life and protection of children.

And the church’s claim to be the defender of Polish democracy, won by supporting the Solidarity movement against Communism in the 1980s, has been undermined by its embrace of the governing Law and Justice party, which has dismantled liberal institutions and promoted xenophobic and authoritarian policies.

‘A contract between bishops and politicians’

Most scholars of political transitions will tell you that successful transformations have one thing in common: Their leaders do not allow the perfect to be the enemy of the good.

Poland’s transition to democracy, and the compromises that were made, was no exception. After the fall of Communism in 1989, the Catholic church gave crucial support to the pro-democracy movement. But while that enabled a smoother transition to democracy than in many other post-Communist countries, it left the church deeply embedded in politics and able to insist that the new government legislate the church’s position on social issues.

One of the Church’s main priorities was a law restricting abortion, which had been widely available in the Communist era.

The resulting 1993 abortion law was “like a contract between politicians and bishops,” said Joanna Scheuring-Wielgus, a leftist member of Parliament known for her investigations of child sexual abuse within the church. The law came with some exceptions: it allowed abortions in the case of rape or incest, danger to the life of the mother, or fetal abnormality.

But there was no hiding the fact that women had more reproductive freedom under Communist rule than they did in the new democracy.

“It was not a compromise for modern society, for women,” said Danuta Huebner, a Polish member of the European Parliament. “Emotionally, this thing was never solved.”

Subsequent governments have struck similar bargains over issues like Poland’s membership in the European Union. And in 2015, the Law and Justice Party, led by Jaroslaw Kaczynski, swept to power with a pitch to voters that combined economic generosity and disgruntled nationalism with Catholic social conservatism. The party’s presidential candidate, Andrzej Duda, won re-election this year.

But women have gained economic and social power even as the far-right government pushes to preserve traditional gender roles that remain popular with voters, both men and women, in many rural areas. According to data from the O.E.C.D., the gender wage gap for median earners in Poland is only 10 percent, one of the smallest differentials among the group’s countries. Forty-three percent of young women earn university degrees, compared with only 29 percent of young men. When Poland joined the European Union, that brought new opportunities to work and travel in more secular countries.

Many Polish women, especially in the cities, empowered in other areas of their lives have become less willing to embrace a church that excludes them from positions of power and authority — or a political system that gives that church power over their lives.

“I think, I feel, I decide,” a signature slogan of the protests, has been chanted in streets and squares across the country during weeks of demonstrations.

Mr. Kaczynski says the Catholic church is fundamentally interwoven with the Polish nation, and Polishness itself. And that has meant embracing its values.

Party leaders have claimed that homosexuality is a threat to the soul of the nation, and that the secular values of the European Union are incompatible with Polish life.

Ms. Ślusarczyk, the high schooler from Warsaw, said she fears those who believe in that vision of Polishness, and believes that many hate her for not conforming to it.

“If I go out of the house and I see someone wearing a shirt with a Polish flag or a national symbol or a symbol of the independence day, I feel afraid,” she said. “Because of the way the country is divided, it’s always ‘us’ and ‘them.’”

No issue has provoked open conflict between those factions like abortion. In 2016, Law and Justice tried to pass a law outlawing abortion in the case of fetal abnormality, which accounts for more than 80 percent of the procedures performed each year, but failed after large protests erupted.

The government then turned to the constitutional court, which was packed with party loyalists, and asked for the same restrictions on constitutional grounds.

When the court issued its decision on Oct. 22, the country exploded in even larger protests.

Even though the government later delayed putting the abortion law into effect, the protests have continued, with expectations high that it will eventually be pushed through.

Anna Jakubowska, 40, a businesswoman from Warsaw, kept returning to one word when trying to explain what had moved her and so many other women to protest: anger.

“We are very angry,” Ms. Jakubowska said, at politicians who legislate that women must give birth to severely disabled children but fail to support them as parents, and at fathers and grandfathers who wave away the trauma of unwanted pregnancy. Above all, she said, she was angry at the power afforded to the church even though it excludes women from its hierarchy.

Last year, the documentary “Tell No One” drew widespread public attention for the first time to the Polish church’s history of protecting priests who had raped and molested children for years.

A poll last year by IBRiS research found that fewer than 40 percent of Poles trusted the church, down from 58 percent in 2016.

For Ms. Jakubowska, the contrast between the standards the church wanted to impose upon women and the standard to which it held its own clergy was too much to bear.

“The Bible says if you are the sinner you have to pay the consequences,” she said, “But there are no consequences.”

She added, “That’s why women come to the street.”

A generation rejecting the church’s power

In most countries, angry teens shouting at an authority figure would be a dog-bites-man story. But when a video appeared of young women screaming obscenities at a priest in the northwestern town of Szczecinek in late October, it went viral.

The Szczecinek confrontation “beautifully illustrates the generation that has rejected the church’s power,” said Carolin Heilig, a doctoral researcher at the University of London who studies civil society, gender and protest in Poland.

Ms. Huebner, the member of the European Parliament, said that for young Poles, “this discontent has been brewing for a long time.”

“The church having this impact on the ruling party, this relation of host-parasite that exists in Poland, people do not approve of it anymore,” she said.

Poland’s protests have been disruptive, but their outcome remains uncertain. Change can be frightening, even for those who disapprove of the symbiosis between church and state. Unraveling that entanglement will also touch on personal relationships, religious faith, career decisions; for many, that prospect is too daunting.

“The crucial thing is to talk about it,” Ms. Ślusarczyk said. “For example, to grandmas and fathers, people who don’t get it because they never were taught to get it.”

But Ms. Jakubowska believes that change is inevitable.

“Even girls in small towns, even if they are still under the rule of men — because they are — they are changing,” she said. “In a few years there will be a great change because the church will be empty.”