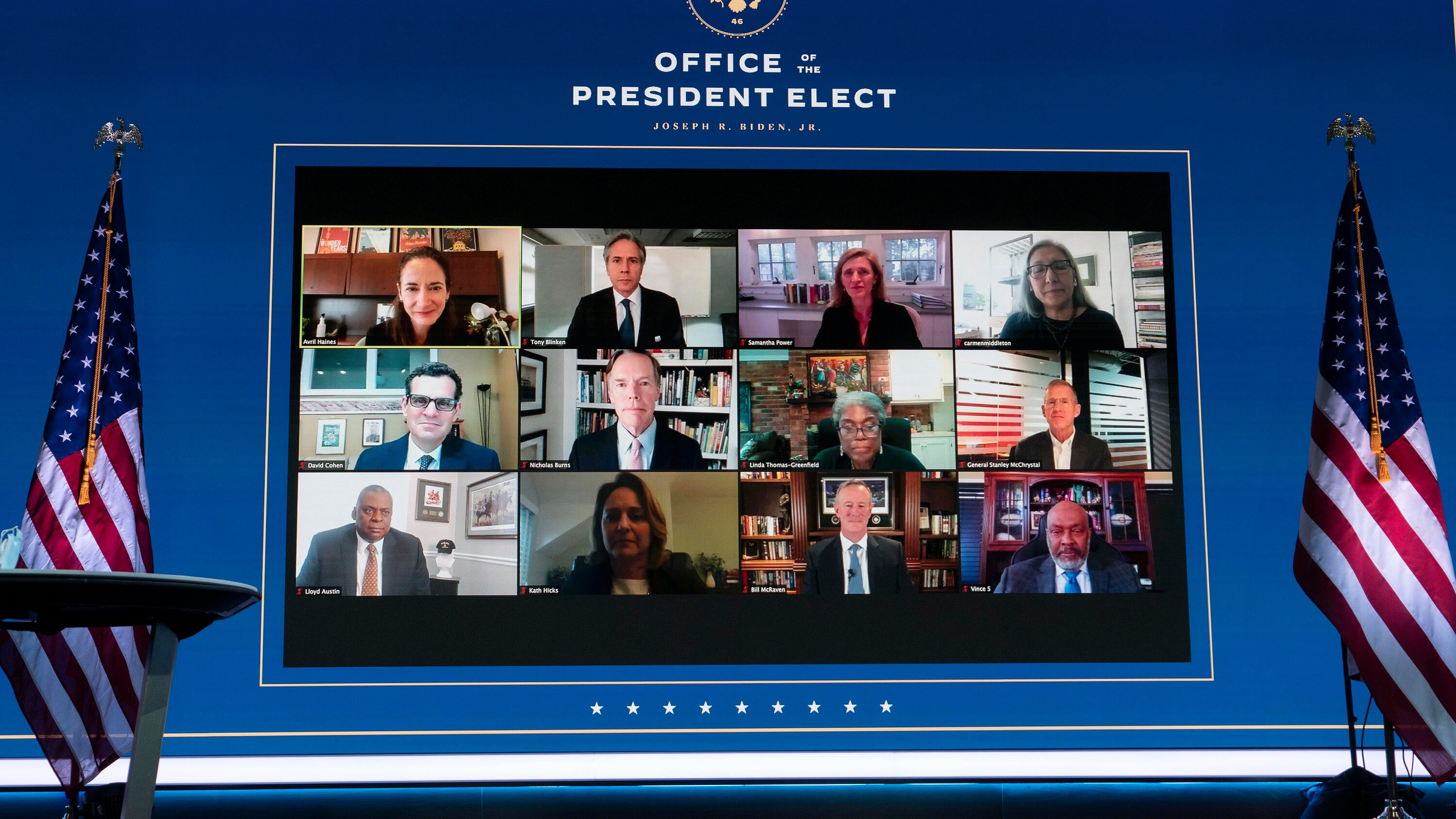 WASHINGTON — Prevented by President Trump from being briefed on national security issues by the government’s own officials, President-elect Joseph R. Biden Jr. turned to his own circle of experts for guidance on Tuesday in a stark reminder of Mr. Trump’s refusal to cooperate in a traditional transition.

The virtual meeting, which Mr. Biden led from Wilmington, Del., was attended by 13 former military, diplomatic and intelligence officials who served during the Obama administration, including some most likely in line for senior positions on Mr. Biden’s incoming national security team.

“I am unable to get the briefings that ordinarily would come by now. And so I just wanted to get your input on what you see ahead,” Mr. Biden told the group. “To state the obvious, there’s no presidential responsibility more important than protecting the American people.”

Underscoring another serious consequence of the delay, members of Mr. Biden’s Covid Advisory Board issued their own warning that planning for distribution of a coronavirus vaccine and other attempts to combat the virus were being frustrated by Mr. Trump’s refusal to share information.

They said that they were being prevented from working with government officials in charge of distributing the vaccines and had not been given access to any government data on case counts, deaths or hospitalization, relying instead on media and private reports.

“There’s no time to waste. We don’t have a day to waste,” said Dr. David Kessler, a former commissioner of the Food and Drug Administration, reiterating the message that Mr. Biden himself had for reporters on Monday. “Vaccine distribution is difficult and daunting under any circumstance.”

Mr. Biden’s health advisers painted a grim picture of the months ahead, saying that the rapid spread of the virus across the country calls for more coordinated and aggressive actions by the federal government and local authorities. They said that waiting to begin that coordination until Mr. Biden becomes president on Jan. 20 will be costly.

A political appointee of Mr. Trump’s who heads the General Services Administration has refused to formally certify Mr. Biden as the winner of the election, a move that would allow current government national security and health officials to work with the Biden transition team.

In a statement, Mr. Biden’s transition office said that until “ascertainment” by the agency, his transition team “will continue to hear from distinguished former practitioners.”

Mr. Biden said on Monday that the result of a delay in coordinated planning for the distribution of a vaccine was that “more people may die” from the virus. His advisers offered more specifics on Tuesday, saying that the incoming team needs access to information about medical supply chains, data on testing, specifics about therapeutic efforts and other data that will be critical once the Biden administration is in charge of carrying out the Covid response.

“There is valuable information inside the administration that is held by career officials,” said Dr. Vivek Murthy, a chairman of Mr. Biden’s advisory board and a former surgeon general. “We need to talk to those individuals. We need to work together with them.”

But the advisers also said that the positive news about promising vaccines should encourage Americans that closed businesses and mask-wearing will not last forever, though Dr. Kessler said that people should continue to strictly adhere to the health guidelines for several more months.

“For the first time, we can see an end to this epidemic,” he said.

Mr. Biden’s online session with the former national security officials was a partial substitute for official daily briefings, which deliver real-time intelligence and analysis drawn from the federal government’s vast global resources. Like Mr. Biden’s health advisers, his national security team is instead relying on news reports and informal contacts for information about world events and security threats.

The briefers included Mr. Biden’s longtime foreign policy aide, Antony J. Blinken, a former deputy secretary of state and a possible pick to be his national security adviser, and his transition team’s director of foreign policy, Avril Haines, a former deputy at the Central Intelligence Agency. Also in attendance were four retired military generals, including Stanley A. McChrystal, whom President Barack Obama fired in 2010, along with Samantha Power, who served as Mr. Obama’s U.N. ambassador.

“I think we have to renew America’s leadership and put the United States back at the head of the table,” Mr. Biden told the group in his only public remarks. Reflecting his campaign message that America’s standing in the world depends on its strength at home, Mr. Biden said that “we are going to need to reinvigorate our democracy.”

Mr. Biden offered few other details about the conversation, which featured a notably diverse group, especially by the largely white male standards of the national security establishment.

It included retired Gen. Lloyd J. Austin, the first African-American commander of the military’s Central Command; Carmen Middleton, a former No. 4 official at the C.IA. who was the highest-ranking Latina in the intelligence community when she retired in 2017; retired Marine Lt. Gen. Vincent Stewart, who is Jamaican-American and a former director of the Defense Intelligence Agency; and Ambassador Linda Thomas-Greenfield, a retired career diplomat who is among the Foreign Service’s most accomplished Black members.

Not present were some heavyweight figures in Mr. Biden’s orbit who may be in line for cabinet posts: Susan E. Rice, a former national security adviser who is regarded as a candidate for secretary of state, and Michèle Flournoy, who served as the Pentagon’s top policy official under Mr. Obama and is considered a contender for secretary of defense.

Collectively, the group offered Mr. Biden hundreds of years of experience and impressive intellectual firepower. But all have been out of government for several years and are no longer privy to the fresh, top-secret information that Mr. Biden would be getting during a normal presidential transition.

On Monday, a frustrated Mr. Biden noted one small piece of “good news”: Vice President-elect Kamala Harris remains a member of the Senate Intelligence Committee and continues to receive the regular classified briefings provided to its members. Ms. Harris attended one such briefing on Capitol Hill on Tuesday, her Senate spokesman said.

Mr. Biden also spoke on Tuesday with five more foreign leaders, including Prime Minister Benjamin Netanyahu of Israel and Prime Minister Narendra Modi of India, bringing to at least 13 the number of major leaders with whom he has spoken this week.

His relations with both those leaders could be difficult: Mr. Modi has drawn criticism from Democrats for his authoritarian Hindu nationalist approach, while Mr. Netanyahu has for years aligned himself with Republicans.

In a summary of the call, the Biden-Harris transition team said that Mr. Biden and Mr. Netanyahu discussed “Israel’s security and its future as a Jewish and democratic state,” as well as “the many challenges confronting our countries,” likely euphemisms for broad disagreements over how to handle matters like Iran and the Palestinians that could vex U.S.-Israeli relations in the coming years.

But the summary also said that Mr. Biden “expressed his determination to ensure that the U.S.-Israel relationship is strengthened and enjoys strong bipartisan support.”

“There’s a degree of enthusiasm and expectation that we’re going to have difficulty meeting,” Mr. Biden said of the calls. “But my biggest message is: America’s back and it’s no longer America alone.”