As Grassley Tests Positive, Virus Threatens to Stall Work in... 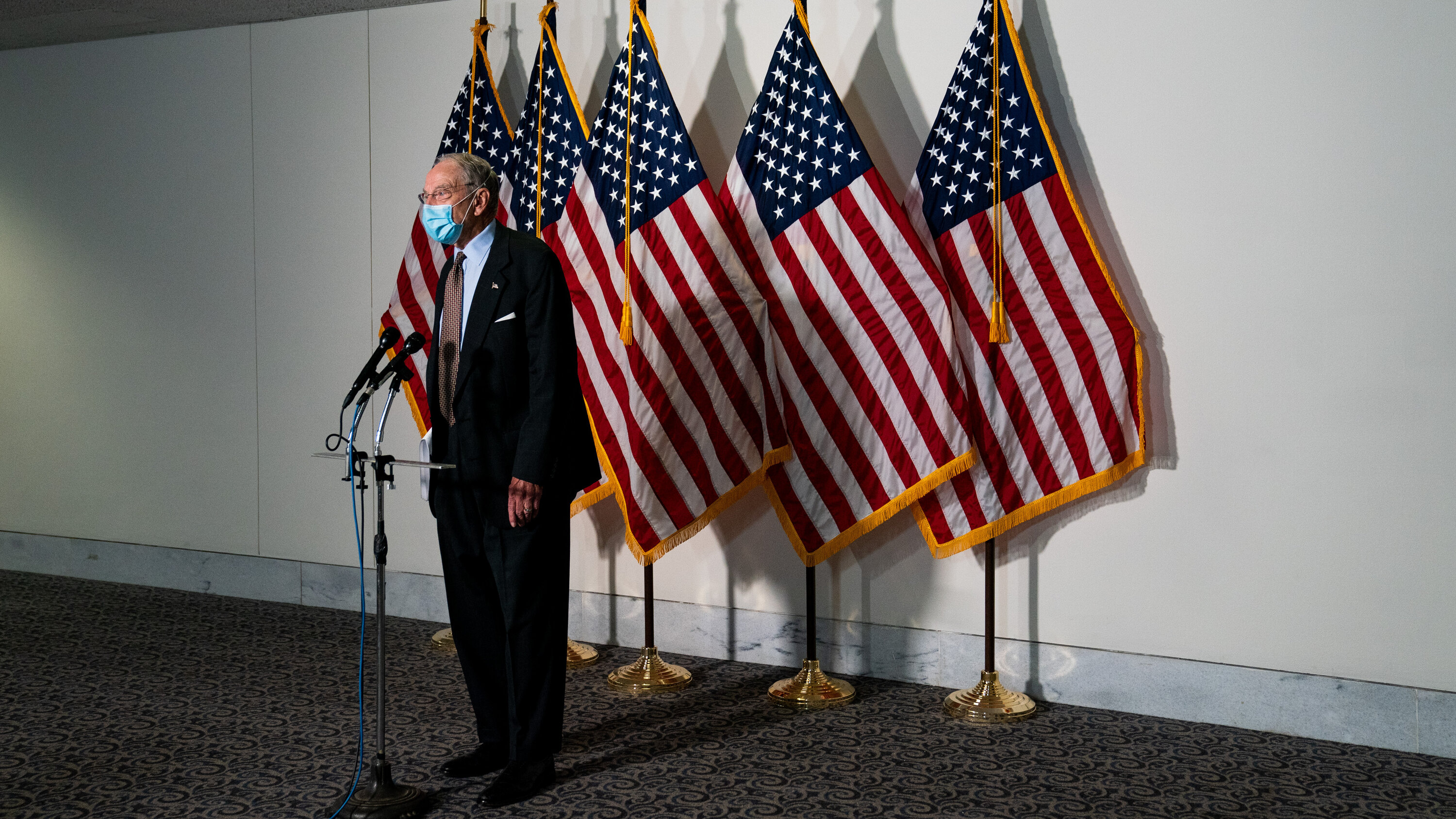 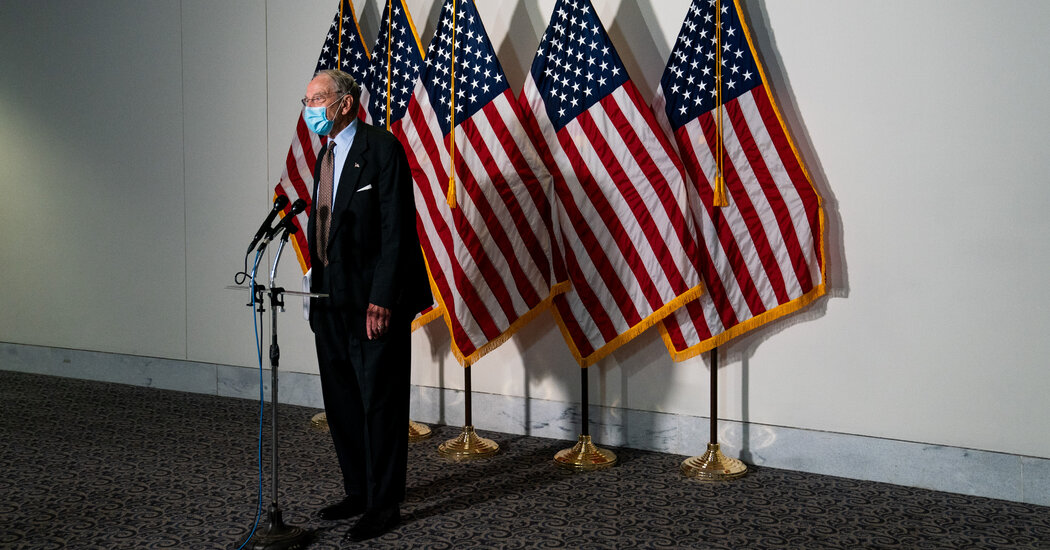 WASHINGTON — The oldest Republican in the Senate tested positive for it. The oldest member of the House was hospitalized with it. And several more lawmakers have announced they have either been diagnosed with the coronavirus or are quarantining after exposure to it, in what is threatening to become a mini-outbreak on Capitol Hill that has already disrupted the business of Congress.

Senator Charles E. Grassley, Republican of Iowa, 87, on Tuesday became the latest lawmaker to be affected, announcing that he had tested positive. His absence helped to temporarily derail the confirmation of President Trump’s nominee for the Federal Reserve Board and shattered Mr. Grassley’s pride and joy, the longest consecutive voting streak in Senate history.

His diagnosis came the day after Representative Don Young of Alaska, also 87, disclosed that he had been hospitalized over the weekend after what he described as a particularly brutal bout with Covid-19. The twin announcements from two men whose gender and age put them at peak vulnerability to being killed by the virus underscored the risks that lawmakers are operating under as Congress continues to meet.

The marble-and-stone petri dish that is Capitol Hill is a vivid microcosm of the national struggle to confront and contain the spread of the pandemic, with partisan bickering often thwarting already unevenly enforced health precautions. Having effectively declared themselves essential workers, the nation’s lawmakers — a group of older Americans whose jobs involve weekly flights, ample indoor contact and near-constant congregating in close quarters — are yet again struggling to adapt their legislative and ceremonial routines to stem the spread of the virus, even as it rages within their ranks.

As of Tuesday afternoon, both Senator Rick Scott, Republican of Florida, and Mr. Grassley were in quarantine as a result of possible exposure, marking the first time Mr. Grassley had missed a vote since 1993. In the House, Mr. Young — who noted on Monday that he was “alive, feeling better and on the road to recovery” after being discharged — is among four lawmakers who have revealed they contracted the virus in the past month.

More than 80 members of Congress have either tested positive, quarantined or come into contact with someone who had the virus, according to GovTrack.

In a memo issued Sunday evening, Dr. Brian P. Monahan, the attending physician for Capitol Hill, informed lawmakers that his office would provide rapid tests that would produce results within six to 12 hours to lawmakers and staff returning to the nation’s capital. The testing, an expansion largely prompted by a travel order issued by Mayor Muriel Bowser of the District of Columbia that requires travelers to obtain a test after arrival in Washington, is voluntary.

But stark divisions remain on how to handle the pandemic in the Capitol — even as states are experiencing the highest number of cases ahead of an expected brutal winter — let alone on how to address its toll across the country. Over the loud objections of Republicans, House Democrats created a proxy-voting system that they announced this week would be in effect through the end of the year, but Senate Republicans have yet to impose any alternative to voting in person on the floor.

The two chambers have never reconciled their varying positions on whether masks should be required while voting. They are required on the floor of the Democratic-led House, but they are only strongly recommended in the Republican-controlled Senate.

Several Republicans, including lawmakers who have had Covid-19, continue to resist wearing masks elsewhere in the Capitol, and a nasty spat broke out about the practice on Monday on the normally decorous Senate floor.

Late last week, House Democratic leaders abruptly transformed an elaborate dinner in Statuary Hall for their new members into a grab-and-go meal after facing a backlash online and internally for hosting such an event when most Americans are being warned to curtail or cancel holiday plans. And during orientation for new lawmakers — which had already been largely subdued because of the virus — Marjorie Taylor Greene, a QAnon-backing Republican, proudly announced in the middle of a discussion of pandemic safety that she had denounced face coverings.

It is a dynamic that bodes poorly for attendance in the waning days of the 116th Congress. On Tuesday, the absence of Mr. Grassley and Mr. Scott temporarily stalled the confirmation of Judy Shelton, Mr. Trump’s Fed nominee, after Republicans fell short of the support necessary to advance to a final vote.

“There’s this kind of macho, ‘Well, I’m not afraid of Covid’ thing going on,” said Senator Brian Schatz, Democrat of Hawaii, who has one of the longest congressional commutes and has instructed his entire staff to work remotely. “We have to run the government — that’s our obligation. Our obligation is not to show that we’re personally unafraid, because we have to pass legislation to address this crisis, and we’re no good to anybody if we’re sick or quarantining.”

The partisan divisions were further underscored by a tense exchange on Monday evening between Senator Sherrod Brown, Democrat of Ohio, and Senator Dan Sullivan, Republican of Alaska, while Mr. Sullivan was presiding over the chamber.

When Mr. Brown rose to speak, he asked Mr. Sullivan, whose mask was off and lying on the desk in front of him, to “please wear a mask,” in part to protect the staff members required to sit on the dais just below, at a distance closer than the six feet recommended for proper distancing.

“I don’t wear a mask when I’m speaking, like most senators,” shot back Mr. Sullivan, who wears a mask around the Capitol but removes it to speak on the floor. “I don’t need your instruction.”

Mr. Brown declared that Mr. Sullivan’s objection was evidence that “there isn’t much interest in public health” in the Senate and circulated a clip of the exchange on Twitter.

Senator Ted Cruz, Republican of Texas, joined the fray, saying that Mr. Brown was “being a complete ass” and calling his decision to wear a mask on the Senate floor “an ostentatious sign of fake virtue.”

Yet some other senators appeared to seize on the opportunity to use their positions to send a message about the virus. Senator Rob Portman, Republican of Ohio, announced he had begun participating in a vaccine trial this month, in part to counter the misinformation circulating about the virus and the effectiveness of a vaccine.

“It’s probably the one thing everybody can agree on,” he said, adding that he planned to introduce bipartisan legislation to provide for a public service campaign boosting an eventual vaccine. “I really am concerned that people aren’t going to take advantage of this opportunity to protect themselves, their families and protect the community.”